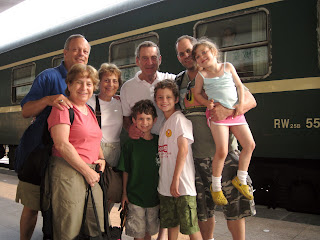 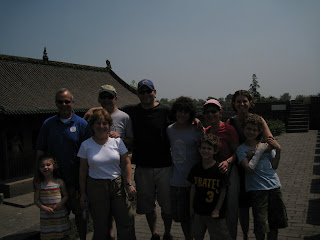 The Stresses and Rewards
Of Playing the Tour Guide
July 4, 2008

I wear a lot of different hats: father, columnist, blogger, Olympics reporter, bandleader. But the most challenging and at times anxiety-provoking is tour guide. I’m fully in that mode now, with my parents, aunt, uncle and nephew visiting.

I am filing this column from Xi’an, the city in central China that is home to the terra-cotta warriors, the 8,000-strong, 2,000-year-old funereal army of the first emperor of China. You can blame any typos or errant thoughts on the fact that I spent two of the past three nights aboard overnight trains, shepherding my family across China while worrying about their well being and occasionally cursing both our travel agent and my own judgment. How smart could I be to drag my folks, aged 70 and 72, on two 12-hour rides on Chinese trains?

When close family comes to visit, I feel an obligation to make sure they have not only a great time but a genuine “China experience.” The easy and probably more intelligent thing to do would be to turn them over to a tour agency. But I want to show them the real deal, take them off the beaten track, make sure they see China as we know it. My wife, kids and I have had some great trips traveling through China’s interior, including several overnight train journeys, and we want to share it. We want, in essence, for our visiting family to share our expat experience.

By taking on the job of travel agent and tour guide, however, I am accepting a tremendous amount of responsibility. Throughout our journey I have often felt a creeping anxiety, as I worry whether everything will work out and whether everyone is happy. As I’ve noted before, when people say they want to go off the beaten track, you never know just how deep into the ruts they really want to head. And in China it’s not hard to find yourself in a dangerous or just plain difficult situation.

When my family was in Beijing, we explored some of my favorite spots and I also planned a couple of journeys for them to take on their own. But we also wanted to take a trip together. I planned a visit to Northern Sichuan months ago, but the earthquake made me doubt the wisdom of a trip to that province. With the dates closing in, I decided on a trip to the ancient walled city of Pingyao and Xi’An,

With all those other hats I wear, I probably didn’t invest enough time researching every facet of the trip. Instead, I relied on a travel agent who I have used many times. But it’s always a mistake to trust the sensibilities of a guide or agent without going over every detail in detail, especially in China where the emphasis seems to be on seeing as much as possible rather than lingering in any one place. The trip ran away from me and it was almost too late to change by the time I realized we were booked onto two overnight, twelve-hour train rides in three nights. (I had thought the two cities were much closer together.)

My wife Rebecca and I have taken several overnight trains and they have turned out to be highlights of our stay and probably the thing about China my kids are most likely to remember for years to come. But there were some significant differences this time — which didn’t bother our kids one bit and wouldn’t have bothered us, either, except that I was seeing everything through my guests’ eyes. Things that seemed normal to us were anything but so for them. Times like this make you realize how much your own perspective has changed.

There are four classes of Chinese train tickets — hard seat, soft seat, hard sleeper and soft sleeper. We have always taken the latter, which features cabins with four bunks and some privacy — if your group is the right size — plus bathrooms used by fewer people. Most stations we’ve been to also have special soft-ticket waiting areas. Not so the massive Beijing West Railway Station. We instead walked into a massive room packed with people, many of them farmers or migrant workers heading home laden down with huge bags. Because the hard-seat cars are unreserved — and many people have to stand for days to get to their destinations — the line for the train formed early, already snaking to the back of the room when we arrived an hour before departure.

When the train was called there was a tremendous surge forward, with people pushing and shoving as one great mass. After debating how long we should wait, we all joined the scrum and clambered through the line. Arriving on the platform, I noted that we had an ancient train, considerably older than any we had ridden here before. We trudged alongside it, looking up as people piled into the hard sleepers, which are lined with bunks, three in a stack that reaches the ceiling.

The scene astounded my father. “This looks like it dates back to Chiang Kai-Shek and the Kuomintang (who left for Taiwan in 1950),” he said. He was right.

Just before leaving we had discovered that our party of 10 could only get seven soft-sleeper tickets — split among three cabins — and three hard sleepers. I actually had wanted to try the more communal hard sleepers, but not with my extended family in tow. As we boarded and the reality of being scattered across two cars bunking with strangers set in, I began to feel anxious, guilty and rather incompetent as a trip planner.

Luckily, everyone’s sense of humor remained intact. All 10 of us crowded into the single cabin we had to ourselves. The adults cracked open a bottle of wine while the kids climbed to the top bunks and happily settled into some sort of fantasy game. We toasted our trip and shared some laughs, though my father’s repeated talk about the filth of the windows and the floor occasionally unnerved me.

The next problem to deal with involved the squatty toilets, which my mother struggles mightily to use. Most Chinese bathrooms also have one Western style toilet, generally marked “For Deformed Man (or Woman) Only.” I figured that the train might as well, and set out to ask the conductor. When she didn’t understand my request, I searched my Chinese vocabulary and said, “My mother is a very old lady and her health is very bad. She can’t use the regular toilets and needs a special one.”

She understood and leapt out of her seat, practically sprinting to the other end of the car, where she unlocked a little door, behind which sat a toilet, complete with a “sanitary, cleaned” stripe across the bowl and a new toilet-seat cover. I thanked her profusely.

Later when my mother went for a walk, the conductor ran up to Rebecca and asked if “the old lady was okay to walk alone.” In the middle of the night, my mother found the toilet’s door locked again. Realizing she had to find someone to open it, my mom — who is in great shape, exercising five days a week — hunched her back and dragged her foot behind her in an approximation of a deformed woman. It worked, though I’m sure the act was necessary.

I wasn’t around to help her because Rebecca, seven-year-old Eli and I had decamped for the hard sleepers, where Eli and I slept soundly next to each other on top bunks, 12 or so feet above the ground, in an open cabin with 60 or 70 fellow passengers. Rebecca slept directly below Eli, across from a snoring man. As foreigners, we caused a small stir when we first came to the car to check out our bunks, but people were largely settling down to sleep by the time we returned. I woke up at 5:30 and climbed down to look out the window and sip tea next to an old man while most of the cabin snoozed. Remarkably, Eli and Rebecca were two of the last sleepers — I had to rouse both of them around 7 am as we neared our destination.

Such are the things that memories are made of. The UNESCO World Heritage site of Pingyao was filled with beautiful temples and was remarkably real in its old-world charm, right down to a dusty decrepitness on most of its streets; I expected it to be more faux and touristy. The Xi’An warriors always impress, and the holy mountain of Hua Shan — where I had a reunion with my former Chinese teacher-turned-monk, Yechen — was stunning. But the two overnight train rides — the second was cleaner but slower — are what we’ll likely be talking about for the rest of our lives. It is also the kind of experience that helps our families better understand what our expat life in China has been like.
* * *

Write to me and I’ll post selected comments in a future column. Please let me know if you want to share your thoughts but don’t want your letter published. Read comments by readers on my last column about how the annual expat exodus never gets easier.

Normally I’m reduced to rib-cracking laughs by your column, but today as I procrastinate packing up to leave Shanghai by reading your latest column I find myself confronting in print all the feelings welling up inside. We all tell ourselves the same things…what a great experience for the family, the kids…and it is. But saying goodbye to those who have been the “stand-ins” for family and shared all those special moments is just gut wrenching!

We are off to the U.K. (2nd time), but as you well know it is probably just another stopover. Ten years overseas and two children who have never been to school in the U.S. leaves me always feeling guilty for not having the childhood I had growing up in New Orleans (one school for 14 years — where my grandmother and great grandmother also attended). Will try to focus on all the positives you pointed out today and just keep hoping that the career gods will find it in their heart to bring the Goodyears back for another round in China one day!

Thanks for the great story. Having done a four-year stint in Italy and three in the U.K., I have fond memories of the days overseas. The friendships made were, as you say, the very best part. And, the opportunity to learn how other cultures think, work and live was very, very special, too.

I was an expat in Germany in the 70s, and despite the differences in time and place, share many of the experiences you so ably describe. Your comment regarding the stuff you left in the crate back in the States rarely coming to mind is true. But when you finally do get back, you have a unique experience to look forward to. Sort of a mixture of Christmas (Oh, there’s that great whatever, which you haven’t thought about in years, but which you really like), and Halloween (That’s horrible — did we really buy that?). It puts your life BE (Before Expat) and AE in some perspective and highlights how the way you have come to view the world, and the relationship to those who inhabit it, have changed. It will be an enjoyable and thought-provoking experience.

Great Wall hike video Most recent NBC post.. and link to them alll…
Scroll to top