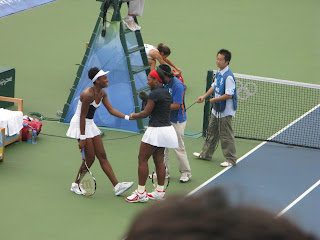 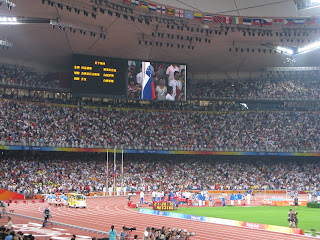 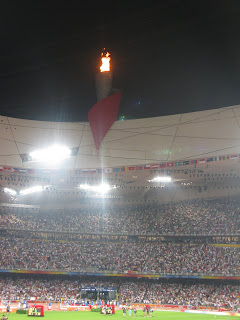 I had two stories to write and figured I could write it at tennis as well as anywhere and, as Becky reminded me, I the Olympics aren’t going on forever. So I jumped a cab to the tennis center and watched the Williams sisters obliterate some Spaniards for the doubles gold. They are incredible. Hard to believe they lost in the singles, which was swept by Russians. I was over there for the medal ceremony. Russian press was going crazy, waving flags etc.

The Spanish fans were going wild the whole time though. Every country but ours seems to have some kind of rhythmic chant, clap and song that everyone knows. we respond with occasional yells of “USA!”

Then I watched Nadal crush someone for a while but had to go to the press room to work. I was about to rush home to get Anna when our friend Theo called asking if she could sleep over, because her kids really wanted to keep her. So I headed over to the Bird’s Nest National Stadium, where I hadn’t come yet during the Games to take in some track and field.

This place is incredible. I think it’s sort of nonsensical, but looking up at that giant flame is somehow inspiring. And the runners… just wow. the women’s 3000 m steeplechase had five of the six fastest times ever. Almost a Russian sweep except a Kenyan woman blew into second at the finish line, which is right in front of me.

And as I prepared to leave and beat the crowds, the massive field for the men’s 10,000 m emerged and I figured I had to stay… a field of 39, featuring two Ethiopian legends. And they’re off…