One of the most moving and cool parts of this trip was returning to Hunan with Lu Wei, our drummer. He is a native of the province and has not been home for eight years now. I still do not fully understand they whys and wherefores. His father and grandfather are also drummers and apparently his father told him when he left for Beijing not to come back until he was a big success.

He as not been back yet – despite being an endorser for two large European drum companies and being pretty widely renowned in Beijing rock circles. The first thing I said when I heard about these shows is I wanted Lu Wei’s father to come. He said it was too far – apparently 8 or 10 hours. I said I would pay for a train or plane ticket. I really wanted to see that reunion. It never happened.

You would think that they don’t have a good relationship, or are even estranged, but it is not so. When we landed in Changsha, Lu Wei immediately took out his phone and called home – “father, I am in Hunan!”

I don’t totally get it. During one of the radio interviews – they all loved talking about our “Hunan ren” – he said that he and his father discussed it and both said they couldn’t handle the reunion; it would be too intense and emotional. I’m not sure when that will ever change.. He also said that his parents were already successful – the proof was that they had raised such a good son.

Even though his home is on the other side of the province in a mountainous area and he had never been to Changsha, Lu Wei clearly felt at home. He was beaming, strutting around, breathing deeply. He loved the food, he wanted to pay for all of our meals. He loved ordering and explaining – and it was all delicious, and incredibly spicy. I will do a whole post on the food one of these days. 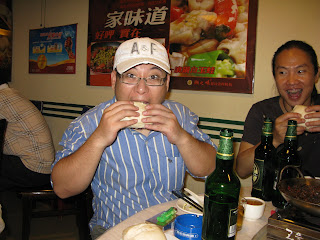 The food alone made Lu Wei so happy. Here he is
eating a “Hunan hamburger,” sort of like a sloppy joe
except with no tomato sauce and lots of peppers, and an
empty soft dumpling shell for a bun. 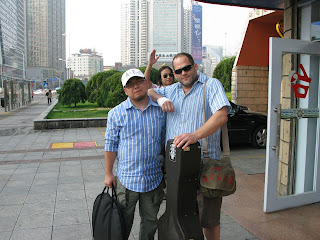 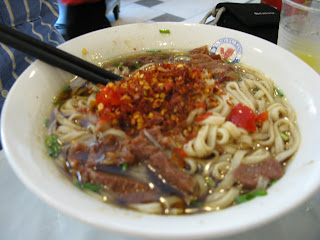 Normal amount of pepper Lu puts in his noodles.

He also drummed like a madman. Check out this video, from our first gig there. He actually got better and better with these solos (two per night) each night.

Hunan updates Glad to be home
Scroll to top