So we left Ranthambore and were headed for Agra, home of the Taj Mahal. But there was a problem — we needed gas and the only station in the area was packed with farmers, some on their tractors, some holding cans, trying to fill up on diesel. We had a diesel vehicle.

Now our driver Ranesh had had the previous day off and I thought it was pretty lame we needed gas, but there was an explanation:

“There has not been any diesel here for two days,” he said. “That’s why there is this wait.”

So we got out and waited, too. Everyone was very calm. No pushing or yelling. This sort of but not really captures the scene: 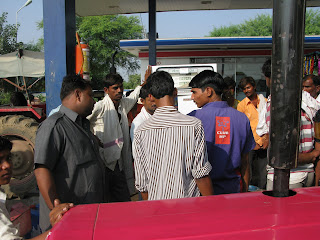 That’s a tractor in the foreground and Ranesh on the left, trying to weasel in.

One of the things that struck me was how most of the tractors were decorated in some fanciful ways, many of them with beautifully colored spangles and other things hanging in the cab, like this: 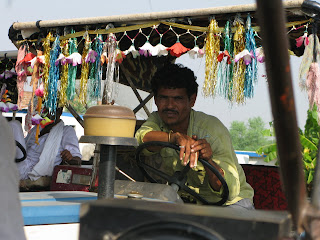 A tractor pulling a wagon pulled in. This is how the wagon was decorated: 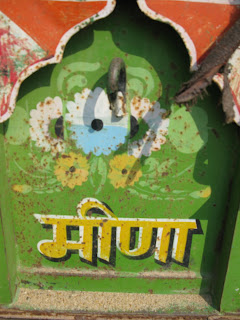 Then we drove on and were supposed to stop at an ancient walled city, said to be just beautiful. We saw it from the “highway” but when we turned to the access road, it was totally stopped. After a bit, the guide we had just picked up got out to check it out and came back to report that traffic was totally stopped. “It’s the celebration at the end of Ramadan and all the local Muslims are coming into the old city to go to the mosque,” he said. “The rest of the city will not be crowded, but we can’t drive.

“We can walk about a kilometer or we can just give up.”

We consulted and decided to walk. The crowds were intense but friendly..no one paid attention to us, really, and we walked a bit until we got to the source of the problem: a truck was blocking the old entrance way and you had to squeeze by single file on either side. This sort of shows what was going on: 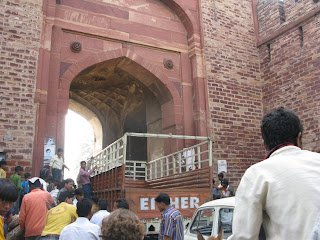 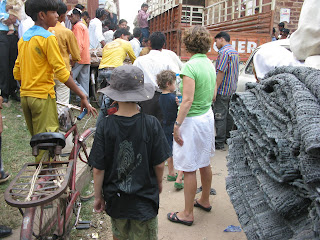 We said “No way” and made our way back to the car, whch had not budged. We passed this bus on the way: 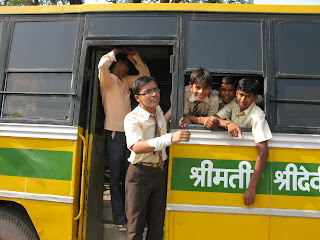 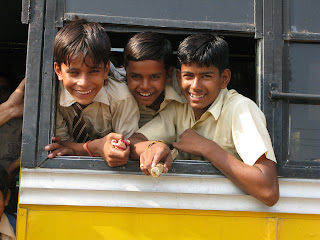 Back at the car, Ranesh executed an extremely impressive 87-point turn and made his way down a bumpy dirt alleyway and back to the main road.