Update: I am home. I wrote the following post on the plane back. It felt great to return and see the kids. I can;t say what it’s worth to see Eli run across the sidewalk with a huge grin on his face and leap into my arms, or to hear Jacob try to explain “electrical votes” to his brother and sister. 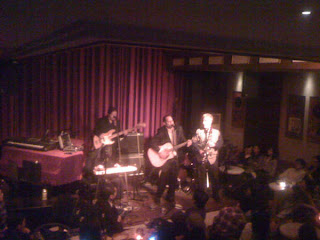 This was our best of four gigs on the tour, at the JZ jazz club in hangzhou, a great place which was packed on two levels.

I am on the plane back to Beijing and happy to be headed home. This was a great little tour but totally exhausting. Yesterday we played two gigs, the International Harmonica Festival followed by a regular bar gig at a cool music dive owned by the same folks who have the beautiful jazz club where we played the night before.

It rained the whole time we were in Hangzhou and we ran round all day yesterday, struggling to get cabs, drop our gear off, do a soundcheck, make it over to the theater, make it back to the gig… we never ate and by the end of the set we all felt ready to topple over.

Some 2 am noodles righted our ship and ended our little tour on a really nice note.

The Harmonica Festival itself was an absolute trip and I will write about it more later, but first a couple of travel notes…

I checked in and got my barding pass and saw that I was in seat 56A. That sort of blew me away. This is about a 90-minute trip and Hangzhou, while a very popular tourist site is not huge city. There are so many Chinese people on the move it boggles the mind. We are on a Boeing 777. I think that’s just amazing that they fly such a big plane between domestic cities regularly. Flight from Beijing to Nanjing was on a slightly smaller but still huge Airbus.

There are some aspects of air travel here that are more inconvenient. Fro instance, I changed my flight here and in order to make the change and pay the small fee I had to go to a separate ticket counter and it takes forever for them to process. It is an annoyance and once or twice I have had that happen when I was in a rush and it was brutal.

But, overall, traveling by plane here is easy and comfortable, much more so than in the U.S. We bought our tickets a few days before we left – and a good thing, since our plans changed. I love that you can do that without penalty.

The security manages to move you along with at least as thorough of a check as you get in the U.S. without you feeling nearly as put upon or humiliated. I can’t quite explain why though I am trying to sort that out. But think about it; China, a police state, moves you through essentially the same procedure as the U.S. in a less onerous, friendlier fashion. I think it speaks more badly about the U.sS system than anything.

I have thought and said for years that most U.S. airport security is a joke, just designed to create the illusion of safety so people can relax. It turns out this is a widely held belief and there is a term for it – “security theater.” I loved this article by Jeffrey Goldberg in which he tried – and largely succeeded – to carry things onto planes, my favorite being a Hezbollah flag. Give it a read.

Anyhow, one other interesting difference is in the amount of luggage, both checked and carry on, that people generally have here. Dave is heading off to other places for work so he asked me to bring his sax back. I was a little worried if I would be able to carry on my guitar and backpack, along with his sax, but I said I would try and check it only if I really had to.

I walked right on, carrying it all. No one blinked or asked me any questions. They took my guitar and put it behind the last row of first class seats. One reason that carry on is not an issue here is that people don’t bring too much on. The overhead bins are half full. Chinese do not have the same fetish for dragging stuff around as we do. I see people checking in small bags that almost anyone in America would bring along as a carry on, and carrying on next to nothing.. a book, a newspaper, maybe a laptop or an Ipod.

As we took off I looked down at the pretty lakes and rivers shrinking below me and thought about how it will fell in just a weeks when I look down and see China fading away outside the window.

We have had such a great run here and while I am sad at leaving many things, I am really trying to look at the flip side and be thankful for having had this opportunity , which really came out of the blue and which has turned out to be so profound. Similarly, while I am deeply sad about leaving the band behind, I am currently choosing to focus on the wonder that it we managed to pull this thing together and make it happen and get as far as we did.

The band has come to define my time here to such a large, and growing extent that it’s hard for me now to imagine what my time here would have been like had it never happened, which could have very easily been the case. It was just a fluke that I met Woodie and our own talkative natures that led our meeting to be anything other than perfunctory

For a long time I wasn’t sure if the band meant anything near as much to Woodie as it did to me, for a whole bunch of reasons. He has been in many bands for many years and performed countless times, in both China and Australia. He has recorded albums, toured, etc. This is all new to me really and part of the thrill is merely the recognition that I can do this and the discovery of something new inside me that I always sort of hoped or suspected was there but long ago gave up any real hope of discovering.

Also, there’s the simple fact that playing all these gigs and having this success in China is extra special, and really quite amazing to me and Dave.. but it is home to Woodie.

So, yeah, I’m really sad about leaving just as the band seems to be hitting a new stride, but I am really, really proud and quite amazed at what we have pulled off. And I am not closing the book on doing more in the future. I really don’t think when I leave it will be the end of Woodie Alan, though we will be doe in our current incarnation.