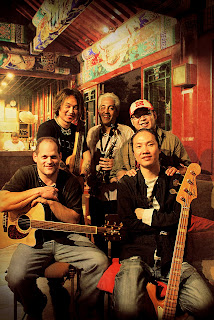 “I hit the city and I lost my band. I know that some of you don’t understand.”
-Neil Young (hat tip to ML “Howlin” Wolfe in Ovieda, Spain)

It’s been a lingering, slowly simmering feeling of loss. I just loved everything about it. The music, the camaraderie, the gigs, the entrepreneurial aspects of booking the gigs, negotiating fees, collecting money, paying everyone…but mostly the gigs and the feeling of being up on stage creating something, riding a wave together. The more we played the better we got, the more cohesive it felt, the more confident we felt — and the better we got, pushing it all up another level as the cycle continued. At the end of the two tours we did, after playing five shows in six nights or whatever, we were really cooking with oil.

We built that whole thing up from nothing to something very real and tangible and it was incredibly satisfying.

Basically, I had two great triumphs during my time in China. I won a big award for the column and another for the band, when we were named City Weekend’s Beijing Band of the Year. The column is obviously more integral to my career and my life going forward, but the band award actually meant more to me. I always believed that I could write a good column, given the right opportunity. I only dreamed I could front a great band.

And I feel incredibly indebted and close to my bandmates for the whole thing because it did not happen in a vacuum and I never would have done any of it — even written a single song — if I hadn’t met up with them. I can’t tell you what I would give right now to just be able to get together and jam with the guys.

As I said, this been a long, slow simmering feeling but a couple of things have brought it into sharper focus for me.

For one, Woodie was supposed to come here this month for a visit, to see some Allman Brothers shows and play a few gigs. It didn’t work out. I had been looking forward to it — though unsure how I was really going to pull it off, amidst everything else. I would have put a band together and played the last few nights.

Before I left we scrambled to finish recording all tracks for a CD. Now, our friend and producer Jean Isma is mixing them all down and sending me some finished tracks and I think they sound great. It is reminder of everything I wrote about above. I loaded a couple of new tracks onto our My Space page. Check out “Mr. Big Shot” and “Got Love.” They are fairly close to final versions, fully mixed.

Going through some old emails, I also came across
these pictures from an Olympics gig.I somehow never looked at them before. Maplewood friend Rick Wagner was in town and jammed with us. He is in a bunch of these pictures. The early ones show us setting up and just hanging out and they made me miss that aspect of it all. The part that feels like you are in a gang, in a good way.

So I’m jamming around here. I played lead guitar in a friend’s otherwise all-chick band for a Battle of the Bands last week, which we actually won (thanks in no small part to dancing girls who came out for three songs). That was fun and I will do more, but it’s not even close to the same.