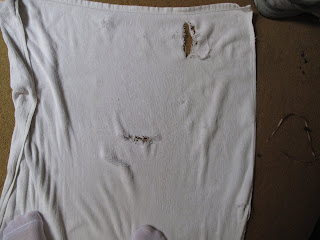 This is my second email post and the first to try and include images.It is delayed because I sent to the wrong address. Trying again…And again.. Just got bounced back because size was too large.. I have now reduced to one photo…
Pictures were trying to capture the atrocious hotel room we stayed at last night in Shenzhen. Highlights included the holy towel and the softcore lingerie picture above the bed.

So I finally broke down and started Twittering after it was pointed out to me by email by a colleague at the WSJ that my current situation is actually pretty interesting. That was when I was sitting waiting for the drum machine/keyboard and acoustic guitar/congo duo to finish their karaoke-like set  at the Ben Se Club in Shenzhen so we could play our 45 minute set. Then we ran out to  a waiting bus and were whooshed to a second Ben Se Club for another similar set. And as I did all this it struck me that, yes, this stuff was actually worth Twittering, I supposed.

So back at the hotel, at about 3.30 am, after eating Sichuan noodles at a street stall, I reactivated my dormant Twitter account and started posting. You can catch up with them here: http://twitter.com/AlPaul

But I thought I would also repost some of them here. I wanted to call special attention to the shadiness of my hotel room. We moved out of it today and into another place, where I am now, which is spartan but much better.

Half the people I know would have a stroke if they saw this room. Dirty and threadbare would be an insult to those words.

Abot the shows I wrote, and this took about four Tweets -such a brief format.

So we played two sets in two different branches of the same club–Ben Se, or True colors – last night. They had a bus waiting to shuttle us. And the second one was big..few hundred people, huge stage, lights, great sound system. We repeated same set and just killed. It was the first time I fully felt the same rush and confidence we were riding before I left in December. I can not believe how far my singing inhibitions are gone. I am letting it all hang out. Now, though, happy to get out of this dump hotel.
—
Alan Paul