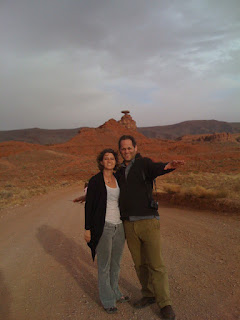 I wrote this column about being married to a successful woman on spec for a new publication and it did not run, for a variety of reasons. A very different version will be out in a few months. I thought I’d post here.

When my family and I relocated to Beijing, China four years ago, a lot of people in the thriving expatriate community there were curious about how it felt to be a male “trailing spouse.” While I did in deed stand out in the crowd of wives around our housing compound, I never really gave my status much thought beyond detesting the inherently demeaning term “trailing spouse.” I have never thought of myself as “trailing” anyone. We may have moved to the other side of the world for my wife’s job, but that hardly defined me. Besides, while this was our first foreign posting, the role was really old hat for me.

My wife and I have been together for 20 years and the outlines of our central relationships – with one another and with our work –were drawn at the very beginning. We got to know each other as college students working at the Michigan Daily, the University of Michigan newspaper. She was my boss there, the Editor in Chief to my Arts Editor. I graduated first and edited a small weekly newspaper for a year. Then we set of for Florida together in search of newspaper jobs.

We interviewed at six papers. She got five offers. I got a half of one– for a part time position at the smallest place we visited. I was dispirited but never thought of the setback as anything other than bad luck and myopic thinking by the hiring editors. I don’t lack self-confidence, which cushioned that blow and has continued to serve me well. It is an essential ingredient for any man married to a successful woman. I have never been anything but happy for her career advancement. Eventually I realized that her success also opened a lot of doors for me, paving the way for me to do what I want, as long as I am willing to also accept being on the domestic frontlines with our kids and home life.

We have now been happily married for 16 years, achieving a work/life balance that has allowed each of us to thrive professionally. Without my support and flexibility, she would not be able to have it all, as a dedicated, involved mother and a highly successful career. Without the stability that her income and benefits have provided, I would not have been able to spend the last decade building a varied, rewarding freelance career writing about my passions, most notably my family, basketball and music.

It was hard to envision all this 20 years ago when we were down in Florida desperately trying to get our feet on the career ladder. I eventually turned down another part-time job in New York City to move to Tampa and join my then-girlfriend. The boss who offered me the position and graciously extended my deadline to accept it as I wavered over what to do, offered some sage advice. “It’s good that you are confronting this issue early in your relationship,” she said. “Because it comes up sooner or later in all two-journalist marriages. You need to figure out how you are going to deal with it.”

She couldn’t have been more right, though the outlines of our implicit agreement shifted subtly over the years. Initially, it was simple: one of us would get a better job offer and the other would find a way to make it work in that new locale. After about 18 months in Florida, where I honed my craft, I was hired as Managing Editor of Guitar World magazine, a far more appropriate and exciting job for me than covering local news for a small newspaper. The magazine was in New York and Rebecca began looking for jobs there while I started working. Not surprisingly, she landed on her feet – by calling the same woman who had been so understanding of my plight. Every subsequent move we’ve made, however, has been triggered by her employment. We relocated from New York to Detroit to New Jersey, to Beijing and back to Jersey.

Each of these moves required me to reinvent myself and, for the last ten years — since our first son was born — to focus first on getting the family settled and righted. (We now have three kids.) It can be overwhelming but I have never really felt anything other than grateful for the opportunities each of these moves has ended up providing me and proud of Rebecca and all she has achieved. I knew exactly whom I was marrying

Besides, as the old saying goes, behind every great woman is a great man.

Line of Duty My new personal website
Scroll to top