This will be my final Expat Life column. After three and a half years, 91 columns and six months back in the U.S. it is simply time to move on.

My recent 13-day return visit to China helped me achieve closure with most parts of my existence there, making the conclusion of this part of my life a bit easier to bear. Though I had a great trip, getting back on the plane to New Jersey felt right. I had no conflicted feelings or second thoughts about where I was headed: home.

The thing is, I felt much the same way two weeks earlier when I landed in Beijing. When I walked out of customs and saw our old reliable taxi driver, Mr. Lu, waiting for me, it felt like I had never left. But as we pulled onto the highway and headed for a friend’s house, it began to strike me that I no longer had a home there. 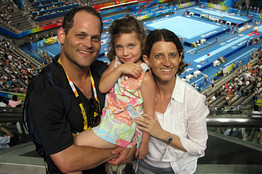 Then we turned onto the road that runs behind the housing compound where we lived and it was so unrecognizable that I thought that Mr. Lu had gotten lost. The tall trees that lined the street were gone, removed several months ago to make way for the massive construction of a new subway line that now dominates the formerly sleepy lane and has completely transformed the neighborhood. I had been gone less than six months, but it might as well have been six years.

Construction is also underway up and down the nearby Jing Shun Lu, a busy commercial road that was transformed from a dusty dump last year by some extensive pre-Olympics landscaping. Much of that work is being ripped up to make way for subway tracks. And the bucolic park by the roadside that used to be filled with kite flyers on weekend afternoons is now a construction site with a massive hole that will soon be a subway station.

The whole area looks almost completely different than it did when I arrived in Beijing four years ago and could hop on my bike and pedal onto completely rural lanes in 10 minutes. It’s mind-bending to contemplate what it might look like in four more years.

Many of my friends’ lives seemed to be similarly under construction. This time of year is always tough for expats as a host of beloved friends depart, but the recession has quickened the rate of departure and lessened the inflow of new expats. A friend who heads the welcome committee at our old housing compound told me she hasn’t greeted any newcomers since March.

Several friends have lost their current positions and are still interviewing for jobs all over the world. As summer approached, they said they had no idea where they would be going. One suddenly unemployed friend was interviewing for jobs in Seattle and London, another in Hong Kong and London — while also considering an entrepreneurial opportunity that would have him leap off the expat package and remain in Beijing.

I hope they will make the same realization that my expat experience led me to: home is where you hang your hat. I felt little emotion when I visited the good friends now living in our old house. The experience reiterated something that I had often felt while living in China and returning to visit New Jersey: my attachment to specific things and places is diminished. Home is where my family is; the building where we live is just there to contain us.

While living in Beijing, Expat Life columnist Alan Paul teamed with a Chinese guitarist to form a blues group. It turns out that there are no language barriers in a musical conversation.

As nice as it felt to be in Beijing and as happy as I was to see so many friends, it was clear to me that I didn’t quite have a place in the firmament there anymore. I felt a bit untethered, floating through others’ lives without the anchor of my family.

I also had reminders of several things I do not miss about China. There were several chokingly bad pollution days and even on the blue-sky day when I flew into Beijing, we descended through a visible, gauzy brown cloud. Everything looked monochromatic — grayish brown and covered with dust. It made Maplewood, N.J. seem like a tropical rain forest. While I was visiting several dogs died in Beijing Riviera, the housing compound where we lived, and autopsy reports revealed high levels of dangerous pesticides, including several long banned in the U.S. I am happy to have my kids out of that environment.

The one time I really did feel like I was coming home was when I took the stage with my band. All of my worries about whether one short rehearsal would be enough before playing 10 shows in 10 days vanished almost immediately after entering a practice space in the basement of a tattoo parlor on the fringes of south Beijing. I found my three Chinese bandmates there and we exchanged happy but brief greetings, then just started playing. It felt like I had never left. We looked at one another and smiled as the music flowed because we were all thinking the same thing: “This is as good as I thought it was.” Once again, musical chemistry had topped verbal communication.

My experience with the band was the opposite of closure — it made me fiercely miss the music and the camaraderie. I am more committed than ever to trying to bring them to the U.S. next summer.

One other emotional trigger came as a surprise: strolling through the airport on my way to Wuxi to visit my former Chinese teacher, I felt more wistful for the soaring new terminal than for my own house. That place was the launching (and landing) pad for so many great trips, adventures that changed the way I see everything and which I’m sure I will remember forever.

Walking by the Haagen Dazs near the security line made me think of my kids, clambering for ice cream every time we were rushing to catch a flight. And that made me miss my family terribly; I wished I was boarding a plane to New jersey right then instead of venturing deeper into China on my own.

My only goal with this column was to honestly relate my own experiences and attempt to put them into some type of context. Some readers have occasionally taken me to be a shill for China or a proselytizer for the expat life. Though neither was my intention, I am not surprised; moving to Beijing was the second best decision I have ever made (after choosing my wife).

Now I am going to have adapt to not processing all of my experiences through this column and to not having regular interaction with so many of you. I have taken as much from my readers as anyone has possibly gotten from me. The feedback and interaction with people all over the world, including many expats, former expats and potential expats, have been not only a pleasure but consistently educational.

Please stay in touch. To drop me a line or see what I am up to, please visit www.alanpaul.net and keep sharing your ideas with me. I will still be finding ways to write about my China experiences, possibly in a book. The expat life will always be a part of me, and so will The Expat Life.

Write to Alan Paul at expatlife@dowjones.com