With the release of Big in China now just one week away, I will be presenting some short excerpts. First up is Through the Looking Glass, taken from Chapter 3, Across the Great Divide. As always, feedback is welcome. Happy reading.

Through the Looking Glass

Alone every morning, as Rebecca immersed herself in a demanding, intimidating new position and the kids headed to school, I realized quickly that I needed to stay on the move. With my new mountain bike, I started making exploratory rides around the area, often ending up at a nearby Starbucks, which I turned into my office, checking email and writing blog posts. I embraced my new anonymity, feeling that it represented a profound opportunity to hit the reboot button on my life.

It felt like we had stepped through a looking glass, fallen through a rabbit hole and emerged in a parallel universe on the other side of the world. With my wife and kids occupied and everybody else I knew 6,800 miles away, I was free to explore. It felt like I was winking at life and getting away with something. I was energized by the raw thrill of being enmeshed in two new worlds: Beijing and Expat Land.

I met an eight-year-old girl whose mother was Indian and father Dutch but who had never lived anywhere but Beijing. Eli became good friends with a five-year-old British girl with a perfect English accent who was born and raised in Hong Kong. At one school assembly, the principal asked how many kids spoke four languages and 20 percent raised their hands. All of this would soon seem normal but it amazed me in those early days. Back home, I was a pretty worldly guy; now I felt like I had just fallen off the turnip truck. It took me most of the year to quit assuming that every five-year-old with a proper British accent knew more than me.

I also quickly learned that in Expat Land, I was a “trailing spouse,” a term I found demeaning for anyone and downright emasculating for a man. This wasn’t all new to me. I had not set foot in an office for a decade, and as our kids’ primary caregiver I was used to being the only adult male in a room, having chaperoned field trips, helped kindergarteners cut and paste and been surrounded by mothers at countless midday assemblies.

But the dividing line was much sharper in Expat Land. We had uprooted our family and moved to the other side of the world for someone’s job, and it was not mine. I also had a certain cool cache back home, as the guy who wrote about music and basketball and didn’t have to shave. Now I was just the dad without a job.

This story is excerpted from Big In China: My Unlikely Adventures Raising A Family, Playing The Blues and Becoming A Star in China (Harper Collins). Available March 1 in all formats at all retailers. Copyright 2011 by Alan Paul. For more information, please visit www.alanpaul.net 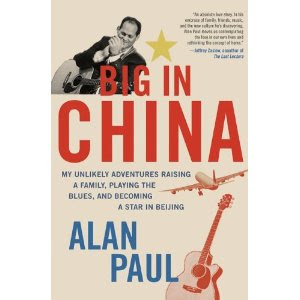 Excerpt coming soon. My story on The Story
Scroll to top