This is one of my favorites. I feel very blessed to have been able to do the things I have in life. But many of the highlights are not the big-ticket items, the meetings with famous people or celebrities that others often ask about. It’s the interaction with some really remarkable regular people, or great artists who are past their glory days and looking back, often in thoughtful, reflective modes. Tiny Archibald is a little bit of all of both, one of the greatest basketball players ever – I would argue the game’s greatest little man ever – and a truly humble, smart, thoughtful dude. Standing on a Harlem elementary school playground rapping with him ranks way up there in my life’s experiences.


The story is close to a decade old. He has long since earned his PhD. Congrats, Dr. Archibald.

Original Old School: The ProfessorSLAM 37: Nate “Tiny” Archibald is willing to tell today’s players what it takes to win.
by Alan Paul 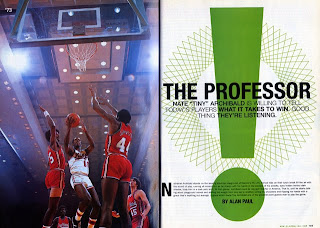 SLAM: You were well known for your spectacular drives. Did you practice the actual moves, or were they all improvised?
ARCHIBALD: Of course I practiced them. You have to put in your time. People say today’s generation of players lack talent. Bullshit. They have the talent, but they put in less time than we did. First of all, we didn’t have videotapes that we watch over and over. So the videotape was in your head. You saw a move and then you had to do it over and over again until you think you got it right. That prompted us to just put in time, and practice hours are key.
SLAM: Everyone who knew you says that you played ball from sun-up to sundown. What sort of things would you practice when you were alone?
ARCHIBALD: Getting to the basket, getting around the invisible man. You do dribble drills, penetration moves, head fakes, practice going under the basket and making a right hand shot after coming in the left side. Work on perfecting your balance and body control. Basically, just doing a lot of unique stuff, so that when you get in the game you know what to do. Those moves don’t just happen.
Take Tim [Hardaway] and his crossover machine-gun dribble. I guarantee that he didn’t get that in the NBA. I saw him do that in high school and college. At UTEP, when practice was over, he was out there practicing his moves against the invisible person. Those are the things you get into. It’s a mental part of the game where you work things out so much that you condition your brain to think, “I don’t care who’s guarding me or how many people are in front of me. I’m going to score.” That’s how I learned, and that’s how we all played when I was coming up.
SLAM: Do you think that’s no longer the case?
ARCHIBALD: People gave us discipline and taught us respect. I see a lot of kids today who are great but don’t have the discipline and respect. It’s about your game fitting into the team concept. If you’re a guard, it’s not just about breaking people down, it’s about running your team. You put a guy in a park environment, and suddenly it’s about show. It’s not about winning, it’s about entertainment. And I know that people always say to me, “Yeah, B, it’s all about entertainment anyhow. It’s a game.” But no—it’s about winning, not about show.
If I do a great move, it’s to create a basket, not to look slick. It’s unfortunate that some of us were born with big ears, because we’ll do a great move and hear the cheers, and instead of continuing the move with the purpose that we had—scoring—we say, “Whoa, rewind. I wanna hear that again!” so back up and try it again, but then I never complete the move. Which means there’s no purpose to the move. All I want to hear is people saying “great move.” But the purpose is to score! The purpose is to pass. The purpose is to do something creative with the ball and be creative, not to just keep on doing the show game. If you can break someone down, go by them and score, don’t try to do it again. Don’t figure if one machine-gun crossover is good, six are better. I see that all the time. The game goes on; it doesn’t stop when you do that.
Whether or not someone can figure this all out, grasp this knowledge, is a key to whether they can make it from a playground environment to a more structured one, no matter how much talent they have. And college basketball is probably one of the biggest determining factors of whether or not a guy will make it. Guys always say, “Why I gotta go to college?” Because you’ve got a lot to learn. 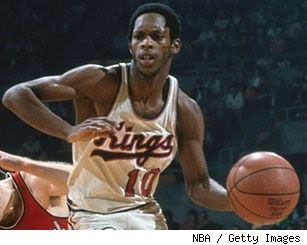 It’s a big world out there… From the archives: Albert King
Scroll to top