In honor of the impending NBA Playoffs, I present you with one of my favorite Slam Old School stories… an interview with the mighty Bob McAdoo, now in his 16th year on the Heat bench. meaning this story originally ran in 1998, in Slam #24. I remember researching Mac’s numbers in the Ann Arbor PUblic Library. You can read this article on Slam Online here. 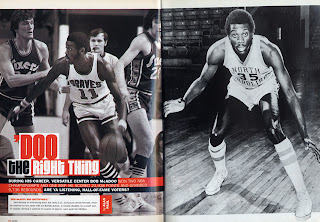