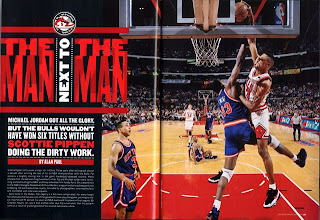 I always love it when Slam pulls some of my articles out of the archives and posts online. This one is no exception. I caught up with Scottie Pippen in Shanghai – you never knew who you might find over there.

Here is the intro to the piece: /

Original Old School: The Man Next To The ManThe Bulls wouldn’t have won six titles without Scottie Pippen doing the dirty work.

If the word “sidekick” was in an NBA Dictionary, an image of Scottie Pippen would probably be directly beneath it. The 2010 Basketball Hall of Fame inductee epitomized the role during his career as a Chicago Bull. Though Michael Jordan was the unquestioned leader of the Bulls during the 90s, Pippen was indispensable in his own right. The Bulls’ franchise recently honored the seven-time NBA All-Star with a sculpture in his image, which now resides inside of the United Center. Alan Paul caught up with Pip for this feature back in SLAM 113, but you can enjoy it here today. —Ed.

And here is the piece:

SLAM ONLINE | » Original Old School: The Man Next To The Man

A nice Panda Dad article. Live on CTV this afternoon
Scroll to top