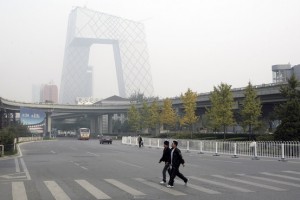 All reports from friends and news sources yesterday indicated that pollution in Beijing was realy, really bad. When I read the opening line of this WSJ China Real Time Report about how the pollution levels are actually downplayed by the WHO, I had a major flashback.

The piece begins, The pollution in Beijing was so bad on Tuesday that sporting activities at international schools in the Chinese capital were canceled.

And that simple line resonated with me, because I remember those days well. The following is an excerpt from Big in China, Chapter 23, You Ain’t Going Nowhere

I never could have made a long-term commitment to living in China, however, because of the pollution, which could be mind-bendingly bad. Rapid economic growth spurred massive construction and an explosion in car ownership, overwhelming other improvements and keeping the air a thick stew of particles and pollutants.

We always knew what we were getting into; a few days into our look-see visit, the skies became hazy and the air began to smell. The “fog” grew for two days until we couldn’t see the high-rise construction project outside our hotel-room window. “It’s good that you’re seeing this,” our guide said. “The pollution’s
not like this all the time but it does happen regularly and you should know that.”

We were too excited to pause and really contemplate the potential health effects on our whole family. That lack of attention sometimes seemed foolish. I often saw a brown mist hovering above the city when I flew in to Beijing, even on days that were crisp and blue on the ground. Many people complained about a “Beijing cough” that lingered for weeks. If we didn’t ride our bikes for a few days, we would find them covered in dust and dirt. The school kept kids indoors on particularly bad pollution days, and Eli looked outside one nasty day and said, “Aw, today’s not going to be any fun. It’s too foggy to play outside.”

Spring sandstorms were also regular occurrences, sometimes mixing with light precipitation to rain mud from the sky. It didn’t rain actual water for our first eight months in Beijing until the sky opened for a thirty-hour drenching that evoked Noah. It felt like a rebirth afterward, with everything looking
and smelling fresh and clean. The city had taken a shower, washing away a heavy layer of grime. I stepped out onto our third-floor balcony and stared dumbfounded at mountains gleaming on the horizon, visible for the first time. A sunset-painted sky reflected off ranges to the north and west, creating a vastly different landscape.

After a couple of atrocious pollution days a friend told me that she had heard of someone finding out that their lungs had been damaged by years of living in Beijing. “Living here is like smoking a pack of cigarettes a day, you know,” she said.

That sounded like an urban legend, but I couldn’t shake the thought, so I asked my radiologist father-in-law to take a chest x-ray on our next visit. The good news was that my lungs looked perfectly normal. The bad news was that they would have looked the same if I actually had started smoking a pack a day two years prior.

“Smoking causes cumulative damage and it probably wouldn’t show up in that short a time,” he said.

There was no way to measure the damage that breathing in Beijing had done to any of us, but there was certainly reason to worry. The Asian Development Bank released statistics showing that Beijing had the dirtiest air of all major Asian cities, with a pollution level seven times higher than what the World Health Organization had deemed safe. I could sometimes feel the pollution in my lungs and in my eyes, as my contacts fogged up.

I spoke to an American environmental expert based in Beijing who said simply, “When it looks really bad outside, it’s really bad.” Still, she urged me to not overthink the problem, insisting that the air was no worse than it had been in the United States or Europe forty years earlier.

“Air pollution is a real problem here, but I think it’s a disproportionate expat concern compared to all the other risks they take every day,” she said.

She was talking about driving, which was a valid point, except that driving was optional, and breathing was not.

Excerpted from Big In China: My Unlikely Adventures Raising A Family, Playing The Blues and Becoming A Star in China (Harper). Available now in all formats. Copyright 2011 by Alan Paul.

Fully Baked This NBA lockout piece is all you need to know, even if Bill Simmons is lame...
Scroll to top