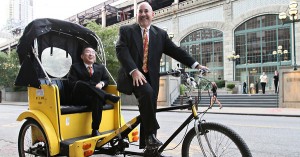 Photo by Tina Fineberg for the New York Times

What a nice story in Sunday’s New York Times Vows section celebrating the wedding of Evan Wolfson and Cheng He. The article rightly describes Evan, as “widely considered to be a key architect of the movement to legalize same-sex marriage.” He’s also a Pittsburgh homeboy and family friend.

I’m sure that like all history, the story behind the fight for marriage equality is more complicated than it sometimes appears and that there have been unknown people in the trenches all along, but Evan is clearly a visionary in this movement. He has been pushing since he was a college student in 1983. It was then, the story says, that he began to understand that “marriage reflected this societal language of commitment and worth, and the law cemented it.”

He wrote his Harvard Law thesis on challenging the laws that barred same sex marriage and in 1993, he founded the Freedom to Marry Coalition and has been at the forefront of this fight ever since.  Oddly, the other leading figure in the early days of this public struggle was another Squirrel Hill homeboy – William (Billy) Rubenstein of the ACLU.

I have always agreed with their principled position and the right to marriage but at first I thought it was an odd cause. I just found the right to marry to be a rather bourgeois battle to wage. Who cares if society grants you their blessing? But now that I have been married 18 years and raised a family myself, I have a more nuanced understanding of both the societal blessings and practical benefits that come with the institution. My own ability to live this great freelance life and stay home on the front lines with the kids while reaping the benefits of Rebecca’s benefits is a classic case in point.

As my own understanding of marriage and its impact on relationships as well as other’s perceptions have matured, I have come more and more to realize just bold a visionary Evan has been. This battle also benefits not only same sex couples but our whole society, because I firmly believe that the fabric will be stronger and more resilient when as many people as possible are in dedicated relationships and fighting the good fight to keep their bonds strong and their homes stable.

I have never, ever understood the logic that expanding marriage rights threatens the institution of marriage. It strengthens us all.

I’m proud to know Evan and really, really happy for him and Cheng to have found each other, and to be able to personally benefit from the revolution he has helped usher in. Best wishes to them, and to everyone else who wants to spend their lives with the partner of their choice.

Guest blogging about the Steelers The sad, sad situation of the Chinese toddler who was run over
Scroll to top