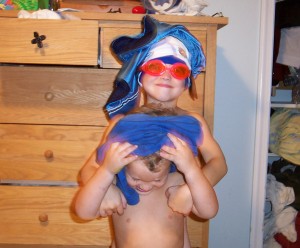 Yep, those are my boys...years ago - and candy didn't make them do this.

Few urban legends annoy me as much as “sugar makes kids hyper.” It’s so widespread that I don’t even bother correcting it any more. I just end up sounding like a know-it-all nag, one of the only things in the world more annoying than someone sprouting off urban tale nonsense as gospel fact.

This one is so widely held that it defies all logic, and really does make refuting it a waste of time. But here we are, a few days after Halloween, my house filled with sugar-y treats and I keep hearing friends and neighbors talking about how their kids are wired on sugar and going wild. I could scream. I could tell everyone they are full of it. Or I could just post this link, and hope some of the people who I talk to read my blog.

Now, calm down, let your kid gorge on candy and then put it away. But when they start pummeling each other with sofa cushions, do not blame the Snickers bars.