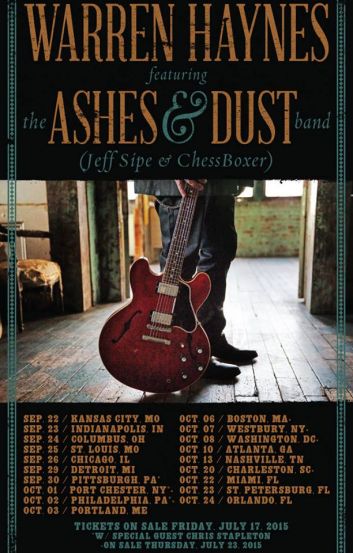 Warren Haynes has announced a fall tour with his new project, the Ashes & Dust Band. The group, which features drummer Jeff Sipe and string trio ChessBoxer, will kick off its tour in Kansas City on September 22 in support of Haynes’ forthcoming albumAshes & Dust (Feat. Railroad Earth). A couple of those dates will also include appearances by special guest Chris Stapleton.

Warren will also play a number of shows in support of the Ashes and Dust with Railroad Earth, who backed him on the record. Those shows will take place in August, and will be followed by Haynes outing with the Ashes & Dust Band.

Tickets for the Ashes & Dust Fall Tour will go on sale this Friday, July 17.

James Brown teaches you how to Boogaloo.