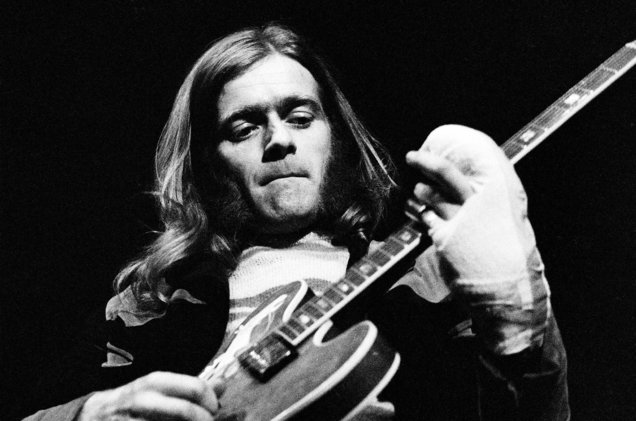 Henry McCullough, 1971 – from Billboard. That’s quite a left hand to play with!

The New York Times ran this nice AP obit, which notes that McCullough improvised his great solo for Paul McCartney’s “My Love” on the spot, in one take. But I wanted to share the following, much more personal take, focusing on the guitarist’s work with Joe Cocker and written by Bob Lefsetz.

Everything below written by Lefsetz – not me!

He was in the Grease Band.

What would you do if I sang out of tune?

You’d know one of the most famous songs of all time, the second cut on “Sgt. Pepper.” An iconic number sung by Ringo, one would think it was uncoverable. But this proved to be untrue.

Underground FM radio was slowly becoming the norm. It was a dividing line more accurate than whether or not your hair was long, did you listen? Late at night? When Alison Steele, the Nightbird, took you on tours of aural fantasy? When Rosko and Zacherle escorted you on adventures? When you tuned in to hear not what was already a hit, but that which was brand new, that titillated you, that made you rush out and buy the LP?

Joe Cocker’s take on “With A Little Help From My Friends” was a revelation, a reworking of a classic number into something wholly different. But it never crossed over to the AM dial, most people never heard it, until the “Woodstock” movie blew a hole in the national consciousness, made rock both the soundtrack and the religion of a generation. This was not 2016, when cultural events come and go, that flick played all summer, and one of the highlights was the aforementioned Mr. Cocker, performing “With A Little Help From My Friends.”

It was the same arrangement, but in its live iteration more haunting and powerful, the Chris Stainton organ solo set the tone, but it was Henry McCullough’s soaring, searing guitar which put it over the top.

There’s not a baby boomer alive who doesn’t know that riff.

And now Henry McCullough is dead.

Music is not like movies. Where the public walks out during the credits. Rather, listeners comb the details, read about the studios, the managers and the personnel. I’ve never met Henry McCullough, but I certainly know who he is. Back when musicians were our heroes, before it became about tech and money and steel as opposed to soul. Cash will buy you a comfy bed, but it definitely won’t keep you warm at night, whereas a great tune will not only toast your tootsies, it will set your soul free and give you a reason to live.

McCullough did not play on the studio original, although he was a member of the cast.

And speaking of casts, he was the guitarist on “Jesus Christ Superstar,” back when it was only a recording, when we did not know that Andrew Lloyd Webber was more Broadway than Brill Building, when limits were being tested every damn day and it was a full time job keeping up.

But Henry did play on the second LP, the eponymous “Joe Cocker!,” which is even better than the debut.

And he also graced McCartney’s “Live And Let Die” and “Hi, Hi, Hi,” as well as playing the solo in “My Love.”

They just wanted to play. Stardom was a byproduct. Until the Beatles no one expected it to rain down coin, no one expected it to last forever, no one believed half a century later those who were exposed to these tunes would remember every detail, not only the tracks, but who played on them.

We bought our tickets and went to the show, the only place you could experience the magic. There were no cell phones, no selfies, no Snapchat Stories, only memories.

And by time I got to see Joe he was playing with Leon Russell and his band of merrymen known as Mad Dogs & Englishmen.

But just a month before, on the very first night I got stoned, on my 17th birthday, I went with my dearly-departed friend Ronnie to see “Woodstock” in the heart of Boston. This was back when films were platformed, when they didn’t come to your own hometown for months, when you made a pilgrimage, when you recited how many times you saw the flick in the theatre, three in this instance, before everything was available at your fingertips.

And there was no advance word, no news, everything was a discovery. And when Joe Cocker took the stage the excitement was palpable, no one knew about his spastic movements, no one knew what the backup musicians looked like.

And then we did.

An Interview with Leon Russell
0 replies