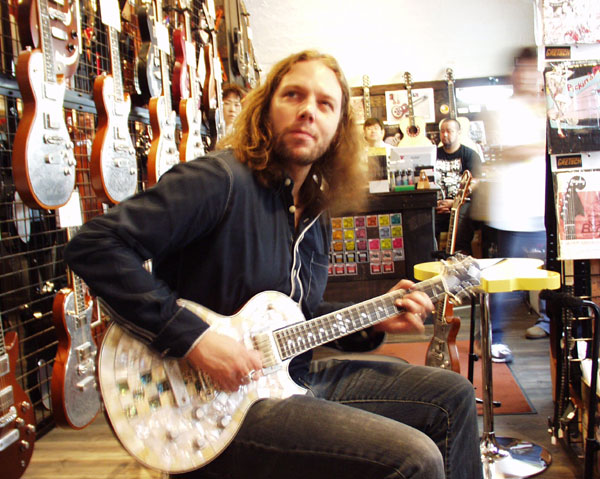 In honor of the debut last weekend in four shows of The Magpie Salute, featuring Rich Robinson with several Black Crowes alum, including guitarist Marc Ford, I present...

The GW Inquirer with Rich Robinson – from 2004, as he was releasing his first solo album, Paper.

You just released your first solo album, Paper. Is this something you’ve always wanted to do?

No, I only started working on the material after the Crowes were no longer playing together. I felt content writing music for the guitar but now that I’ve done it I have a whole new perspective on songwriting. Writing from a total hole is a lot different than working with my brother where I’ll write the music and he’ll write the lyrics. It’s cool having something come totally from me.

You also produced the music. Was it intimidating to be in the studio all alone?

No. I’m really comfortable in a studio; it’s like home. We cut the album much like we recorded many Crowes songs – with me and the drummer going in together and laying down basic tracks, then adding everything else. Except I was doing most of the adding myself – playing bass, lead guitar, keyboards and percussion, plus singing.

There are a lot of rumors that the Crowes will be back together soon.

Chris and I are brothers and we’ve spoken about it and both feel good about the idea, but there are no plans right now. He has a baby, which is my first nephew and we’ve been spending time together and we’re getting along great, so the door is definitely open.

What do you think was your best gig ever?

Two stand out and both were because of the overall experience. Once, we played with Dylan and the Stones in the South of France and it was unforgettable. We did a great set, then stood on the side of the stage and watched Dylan blaze through “Tangled Up In Blue” and a fantastic show. Then the Stones came out and tore it up, with Bob sitting in. The other was in Breja, italy, outside of Milan, where we played with Neil Young in the town square on a beautiful summer night. Dylan came out to see Neil play and hung out on the side of the stage next to us and Neil just tore it up with Crazy Horse.

How about your worst gig?

We played Russia in front of a half a million people and everything about the gig was bad. We had gear malfunctions but more importantly there was just a really bad vibe to the whole thing that freaked us out. There were 40,000 Russian troops beating the shit out of people and we found later that 11 people died and many people were raped. It was just insane and horrible.

What inspired you to play guitar?

AC/DC. I loved Angus and Malcolm and started messing around with my dad’s guitar, which was 50s Martin D28. to get me away from it, he I bought me a Lotus Strat copy and my brother a bass , with one Peavey bass amp for us to play through. It sounded really loud and shitty, but it was awesome. The minute we got them Chris and I ere floored and we started writing songs almost immediately.

John Belushi jamming with the Allman Brothers
Scroll to top