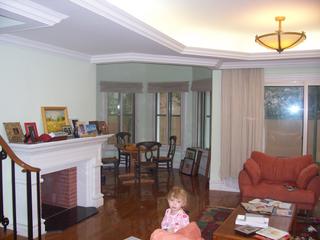 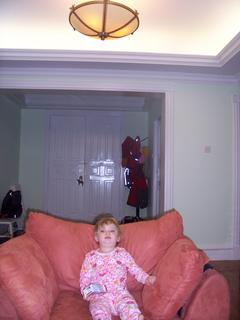 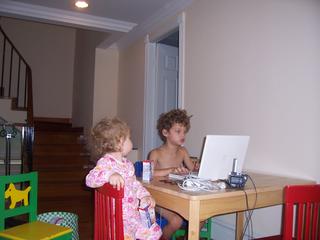 I tried to go around the house and take pictures with Anna in the foreground, but was only partially successful in capturing the house. But it looks great. Our stuff fits in well and for the most part we did a good job in terms of what we brought and left. Only a handful of “doh!” moments. I will take some room by rooms. In the meantime enjoy these and nobody tell j I posted a pic of him playing computer games in his underwear.

Well, we are in the house. Getting ready to go to bed for night two as I write. The house has some quirks, which I will get to sooner or later, but it is very nice. Mostly, though, it just feels really good to unpack and settle in. We have been living out of suitcases to some extent or another since June 29, when the movers first came. And the turmoil began before that as we frantically tour our house apart form top to bottom.

As good as it feels, it is also a little bit of a double edged sword, because there is a certain beauty to the more minimalist life and you dorealize how much of this crap you just don’t need, on any level.

We had a good day here yesterday finishing our move in but it was long and tiring and the kids were at a birthday party all afternoon and then we went to dinner and by the time we got here hteyw ere tired and ragged out. Jacob was intitally very excited about having abunk bed, but then he climbed up on top and felt the mattress and said, “No way am I sleeping on this. It’s way to o hard.” And he’s right. Chinese mattresses are wack — very thin and attached to a piece of plywood, which is exactly what they feel like. There was only one of them in our temp apartment and Eli slept on it and never said peep.

It was actually the first bed I checked out there and I sat on it and wondered what the hell was going on. It felt like something was wrong, like you should remove a piece of wood. Anyhow, Jacob immediately moved into the extra room across the hall. No surprise, especially since we had his old bed in there. And he started calling it “my room.” I figured that was it and the boys would no longer share a room, for the first time. Tonight he really surprised me by saying he was sleeping in the bunk bed. He took this new cozy fleece blanket and this new fuzzy pillow and set up camp up there, with his four or five favorite stuffed animals and talismans positioned in each corner. Hey Danny Rosen if you are reading this, one of these is “wolverine Danny” the little UM football teddy bear you gave him years ago. That’s up there with the dog he won at Coney Island and the Tiger he won at Fantasy Island in Beach Haven and the ‘travel dragon” from his first grade class that Mrs. Greenberg bequeathed him on the last day of school ‘since he was traveling the world.”

Itdoes make me a little nervous to have him on the top of a bunk bed a floor above us, but he is excited. (And since I am finishing this 24 hours later, I can report that he slept all night along with all the kids. There could be some advantages to a floor separation, but we’ll see.)

Yesterday, we had a full day here and the kids were very happy. Anna loves her new room, which is beautifully set up. Eli is very pleased that Jacob has returned to his room – only being exhausted allowed him to fall asleep alone last night since he has always shared a room. The boys are also thrilled that they have their own bathroom (which is rather absurdly palatial), which even has a shower with a seat. They call it their space ship and love firing it up to take off for parts unknown.

They also love riding their bikes around here. Jacob zips around a little too fast and Eli plods along a little too slowly, needing actual pushes every once in a while – the guards will rundown from their posts to do so, prompting e to remark tonight, “good thing they have guards in china.” Eli also tends to cruise right down the middle of the road and look all over the place. I watch him and see exactly the way my dad has always described my own dreamy spaciness when it was scaring him or driving him bonkers. I see that and laugh, but I am also scared. I have nearly 40 years experience in recognizing my own tendencies and adapting survival instincts. Eli’s still need to be honed.