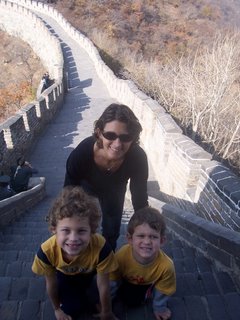 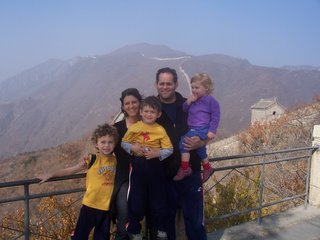 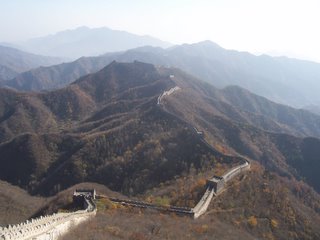 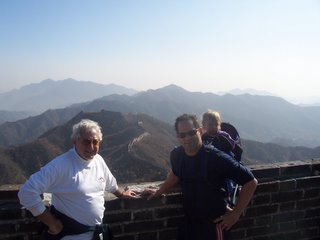 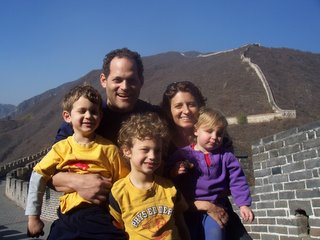 Last Friday, Becky took the day off of work and we took the kids out of school, rented a van for the day and headed out to the Mutianyu section of the Great Wall, with Hal and Ruth., They were leaving the next morning and we wanted to get out there with them and have a special day. Which we did.

Friday was a beautiful, crisp sunny day sandwiched in between a couple of really nasty hazy pollution days. And it was empty out there, by far the least people I’ve seen out there in my four visits. It was really nice to not be totally surrounded, and really walk out there. Weds. I had gone to the summer Palace and Fragrant Hills with Hal and Ruth and both were packed, mostly with Chinese. I also got a call from home with some real bad news while at the palace. So neither of those spots will be too glowing in my memory. The Fragrant Hills were kind of funny. Apparently, it is a huge thing herein the fall to go see the “red leaves” up there. It is in the hills above Beijing and is quite pretty. But the red leaves are pretty pathetic. Clearly, these poor folks have never seen a sugar maple in full fall bloom. The hills were covered with Chinese people, standing in front of every little red-leaved bush taking pictures.

Anyhow, back to the wall… We took a cable car up, went for along walk, including climbing up a couple of towers. Unfortunately, we picked a bad spot for lunch, and were swarmed by bees, which freaked out the boys who wanted to head back.

Hal and I pushed forward with Anna on my back, soon asleep. We walked another half mile or so and then it came to a very steep hill, with a long flight of steps. We trudged up there, slowly but surely. When we got to the top, there was one last flight of steps – about 30 as steep as a ladder. We pulled ourselves up there, my legs starting to really ache. Turns out it was the end of the line. Beyond that, the wall was not refurbished and was crumbling and there was a sign blocking further passage. The view up there was spectacular, as you can see from a couple of the pictures up there.

The next morning at 6:30 Hal and Ruth were off to the airport. They get the award for our first visitors and also for a remarkably short visit – leaving just as they got over their jet lag.