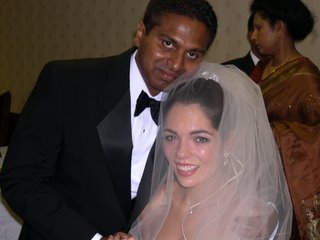 I have met quite a few World Bank people here and Cresenta Fernando has come up in conversation with them several times. This has caused me to think about him quite a bit and I wanted to pause and pay him tribute.

As many of you know, my (sort of, almost) cousin Ariele Cohen married Cresenta in, I think, Sept. 03. They went to Brandeis together and had been together for many years. Cresenta was a PHD Economist and a native of Sri Lanka, where he returned to work for the World Bank. They planned to stay there a few years then return to Washington DC. While on vacation in Gal, on the beach, Ariele and Cresenta and three friends were swept up in the tsunami last December. Ariele and her friends had harrowing experiences but survived. Cresenta was never seen again.

This was, obviously, a tragedy for Ariele and her family and friends. That speaks for itself. But it was really a tragedy for all of us, even if you have never heard Cresenta’s name until now. This is a guy who woke up every morning thinking, “What can I do to improve the world for developing nations today?”

Many of us make the world a little better by not making it worse and doing our own little thing in our own little corners. But Cresenta was out there mixing it up, getting his hands dirty and living his life totally based around these principles. He was young, he was brilliant, he was compassionate, he was dedicated. He was going to do great things. I am sure of it.

I am happy that I got to meet Cresenta and know him a bit. I am sad that I never took the time to dig in deeper and get to know him better. He was soft spoken and quiet and a good listener. He did not talk about himself without prompting. But he was a t the core of a group of great friends and his obvious centrality to them speaks volumes about his character and the quiet power and strength he had. I really enjoyed meeting them all and hanging out at the wedding and again last summer at Cresenta’s memorial service. The latter event was considerably less joyous as you can imagine and listening to everyone share their stories of and passion for Cresenta just wrote large just how much of a tragedy this really was, and just how much he is missed and will continue to be missed and mourned forever.

I just wanted to share that with you guys.

RIP Cresenta. You would have been very surprised to know how deeply you touched me.

Ariele wrote her story herself and did a great job. Click through here
to read it, and make sure you are ready to be moved. She is a great writer and a very strong person.