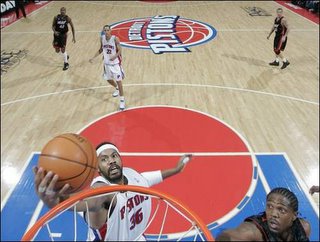 If you prefer to read me in a more official capacity, this same thing is posted here:

It is my account of one of the most red letter basketball nights I’ve ever had. Just superb all the way around.

Tomorrow we are loading up the rented Pontiac Montana and driving from Bay City to Pittsburgh, continuing our Rust Belt winter tour. My brother Delaware Dave will be there with his family and tomorrow night we are going to the Pitt/Wisconsin hoops game before heading home for some New Year’s eve rib roast. Sunday we can watch Steelers as a family, just as we did all through my childhood. My dad is doing pretty well, thanks for asking, but is feeling a little tired. I will check him ou tin person soon enough.

I can see a surprising number of NBA games on TV in Beijing, but it’s all sort of random, with the exception of every Rockets game being shown in Chinese. But as soon as the season began I started itching to actually attend a game. So it was that two nights after landing back in the good old US of A I found myself at the Knicks/Jazz game and six nights later, I was sitting at a press table for last night’s Heat/Pistons Eastern Finals preview in Auburn Hills. Before I get to that, I need to give a quick shout out to Sammy, Slam’s man with the Knicks who set me up with the elite single seat at the broadcast table for the Jazz game.

He didn’t even know that I was fresh off the boat from china and jonesing for an NBA fix when he sat me courtside, right next to Kenny Smith. I got to my seat a little late and saw someone in my spot. I politely tapped him on the shoulder and asked him to move, only to see that it was John Starks. He asked an usher for another seat and we all fit in, no problem. Kenny turned to me during the first commercial break and said, “Come on Slam. You can’t kick John Starks out of a seat at the Garden.” Then we all settled in to watch the game. I made lots of funny, insightful notes but it’s all ancient news now and besides it’s hard to even believe those guys were playing the same sport as the Heat and Pistons, so let’s get to last night’s game…

Pregame, Spencer Haywood was hanging out in the media room, looking resplendent in a pin stripe suit, shaved head, goatee, glasses, huge hands. He looks like he could suit up and play now. TNT is on the flat screen, audio off, and they’re showing footage of Ron Artest. ”Where they trading Ron?”
Spencer asks me. “I know one thing – whoever gets him is getting a player.”

Then he tells me that he wishes he were here last November 19, saying he knew something was going to happen, that he heard some Pistons players talking about goading Ron into something, to help implode a team they saw as a real threat.

“If I were here, I would have taken him right off the court and into the locker room in a headlock and stopped all that nonsense before it happened.”

We talk ed some more and agreed that Ron Ron’s request for time off to promote his CD – roundly mocked – was a cry for help and if it had been heeded and he had received help instead of scorn, the brawl may never have happened.

He then told me about a project he is trying to get underway to get current NBA players to fund both his own youth camps and an improved pension plan for the league originators who are woefully under-served, as illustrated by George Mikan’s death last summer and Shaq’s paying for the funeral of the league’s first superstar. He said he had just met with “Shaq’s guy” and he was hopeful that the Big Philanthropist would get involved.

“I’m not looking for a lot of money from these guys,” he said. “They can just give me their party money from last night. A lot of guys don’t realize that these white players originated the League and know they got nothing.”

We exchanged cards and he saw that I now live in Beijing. “Hey, I’m going to be over there in the next month or so,” he said. “Let’s put together a Slam basketball clinic in Beijing.”

If God is a merciful God, I will be eating dumplings with Spencer Haywood in Beijing before long. Stay tuned.

Meanwhile in the Pistons locker room, Dale Davis, Darko Milicic and Rasheed Wallace were watching the Emerald Bowl on a huge plasma screen. Darko’s locker is filled with Pistons bobbleheads. Double D was trying to shake $100 out of Chauncey to fulfill a betting debt. Rip was proudly displaying his red fox coat, complete with a head on the right arm. “It might bite you,” he said to anyone and everyone who came by for a look. Sheed walked over and fingered the coat.

In the corner, Carlos Arroyo was doing a Puerto Rican radio interview, in Spanish of course.

As game time approached, the crowd became ever more hyped. It was a definite playoff atmosphere in the building and the play was t just as high of a level. The execution on both sides is remarkably crisp and smooth, just a completely different world not only from the Jazz/Knicks game but from most ball I’ve watched in the last 10 years.

Complaining that the Pistons don’t get the respect they deserve is a tiring pastime for the whole state of Michigan and I don’t want to encourage it. But I will say that to really appreciate this team, it helps to watch them up close and personal. They are playing at a very, very high level, way beyond anything we’ve seen in recent years. To me, they currently look like the best team in a decade, since the Bulls’ final championship teams. Everything is run so smoothly and everyone plays with so much confidence and efficiency. There is no franticness, no uncertainty, no slackness or hesitation. Ball movement is crisp and perfect and it doesn’t matter who ends up with the ball as the shot clock winds down. All four starters except Big Ben are capable of scoring from anywhere. Gone are those sporadic but consistent scoring droughts of the last few years.

My nephews Charlie and Michael Langwald are both Pistons diehards and Iam sure that for the rest of their lives they will watch hoops with a vague dissatisfaction and yearning for these teams. Just like my Uncle Benny and the ’70 Knicks. These teams don’t come around all that often.

The Heat also look very crisp and there’s no reason not to expect another superb 7-game series this spring. As in last year’s Eastern Finals, Shaq has his way early, scoring 11 points in the first quarter. But the Pistons don’t seem to mind because they are playing him straight up, with both Big Ben and Sheed having decent success and not leaving any open shots by doubling down. Also, Shaq does not look like he can physically maintain that pace for a full game and I don’t see that changing in the next few months. It is also sort of amazing how ineffective of a rebounder he has become, last night grabbing just six in 36 minutes. In the first half, the heat’s second star was Jason Williams, who was both getting into the lane and nailing jumpers.

As the game went on, D Wade asserted himself more and more and by the fourth quarter he was single handedly keeping the Heat in the game. He is truly a pleasure to watch and once he commits himself to becoming a great defensive player, he will be a certifiably elite player.

Anyhow, you know how the game unfolded and ended. Afterwards, the Pistons players were all talking about it being just another win, but I was sitting right behind their bench and they were all plenty pumped up. And why not? They’re now 24-3 and have beaten the Spurs and Heat in six days. I just think flip needs to give the starting five a little more rest and it shouldn’t be that difficult because Arroyo, Delfino, Dice and Mo Evans all look really good.

Postgame, I saw and chatted with Charles Oakley and then headed for the Heat locker room. Riles was up front, hunched over, head in hands, having just addressed the press. He looked old and tired. Spencer was chatting with Zo, who was loudly telling everyone who would listen that they all owe “this big ol’ brother” thanks for their salaries. If you don’t know what he means, Google “spencer haywood rule” right now. My own peak moment happened a second later when heat assistant Bob McAdoo came out from the back and embraced Spencer. If you don’t understand why this made so happy I can’t explain it.

All in all, a superb basketball night in Auburn Hills. It’s almost enough to make me want to rip up my return ticket to Beijing and stick around Michigan to see how this all plays out.

an interesting read… Getting ready to head back
Scroll to top