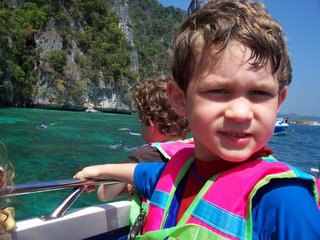 Eli had an accident tonight. Before I proceed with some fairly gruesome details, let me say that he is okay and sleeping comfortably as I write this.

While riding on the back of my bike, his right foot got entangled in the spokes of the back wheel. He let out a yell. I stopped, jumped off and found his little foot twisted at a horrible angle. I was terrified that he would move too much and further damage it. There was a Chinese woman and a young teenaged girl walking right there and they looked on in horror. A guard ran over as well. I yelled, “Hold the bike, hold the bike!” unsure if they understood. The girl got it and held the bike steady while I slowly got his foot out, held his screaming self tight to my chest and ran home, which was just around the corner, abandoning the bike in the middle of the street. (The guard walked it home for me.)

I ran inside, took him to the couch, with Jacob, Anna, Ding and Mr. Li peering on, and took off his shoe and sock. It looked horrible. I saw a lot of color and my first fear was that it was severely cut. I even feared a compound fracture for a moment. I wanted nothing more than to look away but looked closer and saw that the cut was superficial but it was black and blue already, and very swollen. He was crying but surprisingly calm. I called Becky, as calmly as possible told her that Eli was hurt but okay and met us at the hospital, then I called Theo across the street to make sure I was gong to the right hospital. As soon as she heard me say “eli was hurt” she hung up and ran over. In the meantime, I had gotten out a bottle of Motrin and I gave e a double dose.

Theo ran in with her friend nicole, also a neighbor, whose daugther Charli had the exact same thing happen, less severely a couple of weeks ago. Theo said, ”I’ll start the car. Bring him out as soon as you’re ready.” A few minutes later, we were hospital bound in the back of her Jeep. Eli’s panic was greatly eased by the cherry Jolly rancher lollipop Nicole ran in and got. Hey, when the chips are down you find out who your real friends are and these two came through in spades.

One of the only things worse than rushing your 5-year-old o the hospital with a mangled limb is doing so while feeling certain you are responsible for said mangling. I felt horrible about this, having done something that my inner self told me not to do and having Eli pay for my sin.

We got o Beijing United Hospital in about 15 minutes and went right into a triage room. The nurse there looked at his purple swollen lower leg and winced. Then she said, “I saw him move it a little. That’s a good sign.”

I need to move along here because it is bedtime… bottom line is the X Ray was negative, they cleaned it out, wrapped it a little and said let him walk on it as he sees fit. I suspect I will be carrying him a lot this weekend, but the doctor really felt that by Monday he will be much much better. He told us a few other things to look out for. I got home and called Dixie to check out the info we were given and it all checked out. Basically, I guess he has one hell of a sprained ankle. He was in amazingly good spirits If your or mine ankle looked like that, we would be sprawled out in bed guzzling Percocet and gin.

On the way back from the hospital we stopped at a DVD store to see fi they had Home Alone which Eli ahs been asking for since Christmas when he watched it in Bay City. Becky scored with the box set of all four Home Alones. I know what I’ll be doing this weekend. I hear IV is a real work of art. Does Macauley Caulkin play the bad guy? The best part of watching the movie, aside from Eli saying things like, “Don’t worry Anna, Kevin doesn’t get dead” every time he got scared was Jacob laughing so hard he couldn’t stand whenever Joe Pesci or the other guy got whupped on. He really, really loves that stuff.

Well, time for bed. I really feel like we dodged one tonight. It is going to be a long few days, but I feared much, much worse. Tomorrow, Jacob has a big dodgeball tournament at the Japanese school. We were all going to go but now I will probably stay home with Eli and Anna and Becky will accompany the might Dulwich Under 8 dodgeball squad. It honestly was a big deal for Jacob to make the team. They actually had tryout and 42 kids tried out for 15 spots. I think it’s absurd to have kids cut at this age.. but I’m proud Jacob made it. Apparently, the Japanese practice every day all year. I suppose it’s racist, but I keep imagining these little kids putting on Samurai headbands and war paint and being told they are playing for the honor of the rising sun. very sorry I will miss this whole thing.