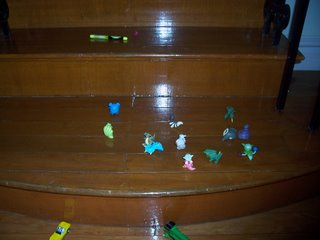 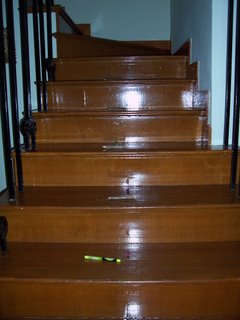 Pictured here are Eli’s traps for us.. not sure how well you can see the evil genius at work here.

So Jacob had a great time yesterday. Last night we went to a dinner with the Newspaper Editors where I was widely introduced as “Jacob’s father.” Marty Baron of the Boston Globe was a particular fan.

Jacob came back with a used-up disposable camera, a pack of Summer palace postcards, a multi-color Olympics-adorned pen and a replica of a Mongol axe. Eli had a hard time accepting all of this.

The hospital pickup went fine and Eli’s leg is much, much better. I was surprised to note that it is still pretty swollen. It has been five weeks, I think. The kid really took a beating. But he is very close to a full recovery. He is still pretty much refusing to wear regular shoes, which he could easily do. He is still wearing one shoe and one sandal, while complaining that people are staring at him or making fun of him for having two different shoes. Chinese people do seem to be particularly amused by this and I have in fact seen several pointing and laughing, or commenting to me. I’m sure he does hear it all the time.

Anyhow, we trekked over to the Intercontinental Hotel in far West Beijing for this cocktail hour and dinner last night and it was worth it. We had a nice time. Jim Pensiero is great, interesting company. Also there was Charlotte Hall. She is the editor of the Orlando Sentinel and was formerly the editor of Newsday, when Becky was there. She was really nice and very proud of Becky.

Midway through dinner, we began receiving the usual phone calls from Jacob and eli. Jacob wasn’t too bad. He accepted that he was going to bed, but kept calling with various questions and excuses… “where is my shirt?” “I have diarrhea.. I think I need to stay up for a while..” “OK, I am going to sleep in your bed.. don’t move me when you get here. Just go to sleep.. ok?”

Eli, on the other hand, was getting more and more enraged… He demanded we come home rgiht away. “Wli,” I said. “we are far away. We could leave right now and not be home for an hour. It’s bedtime so go to sleep with Ding. We will be there.”

At one point, he was carrying on and I said, “Eli just go to bed. If you go to sleep right now, we can get ice cream tomorrow on the way home from school.” [Sometimes raw bribery is called for.]

I think that was the last thing said.

We got home pretty early, about 11 pm, and Ding was waiting up. She was laughing. She took us to the stairs and pointed and said, “Eli did this.. and he say, ‘Do not take this home. It for my mommy and daddy.”

He had boobytrapped the stairs, a la Home Alone (Art was right about us being wary of dropping flower pots.) Each stair was carefully loaded with pencils and tiny pointy hair clips. The bottom stair was filled with hard plastic Pokemon characters. We had a good laugh about this.

He did go to school this morning after some carrying on.