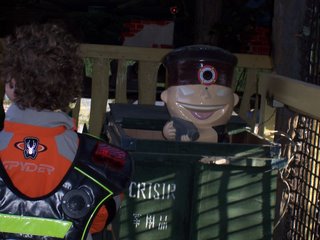 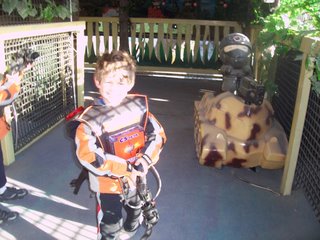 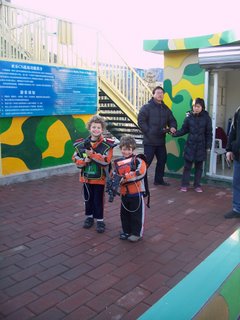 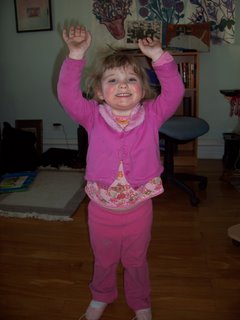 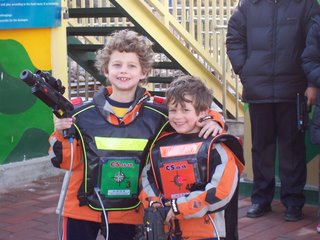 Check out Anna getting ready to go to her first ballet class yesterday with Olivia Moy. I promise tutu pictures within two weeks.

Last Saturday we went to the amusement park in Chaoyang Park downtown. We got there late on a frigid day with Eric Rosenblum and family and could only do a couple of things. One was Space Explorer, an almost exact ripoff of Space Mountain, which I thought was pretty good. We got in there and Jacob and Eli were terrified.. wouldn’t do it.. they wanted me to go first.. so I did.

And I rode it completely alone.. really wild experience, riding Space Mountain alone, in dead silence. I came out smiling and then the boys piled in and we rode it again.

The other thing they did was this crazy shooting game, which is pictured here. You can imagine how thrilled they were. It was really a very creepy game since the goal was to nail these little cartoon kids in the forehead. They loved it. Jacob was basically dropping and rolling all the way through the thing, which involved climbing up a fake tree, navigating swinging bridges and other cool stuff. Eli was just wandering around getting shot, and firing his gun in the air. I was trying to capture it all, largely unsuccessfully.

We actually went to his park one of the very first days we were here, with Kathy and her kids. It was the first day we met Ding, who met up with us there. Seems like an eon ago. It is bigger and nicer than I had remembered and right across the street from Eric and tit’s fabulous new apartment. We will certainly be back as the weather warms. (Today was glorious by the way.)