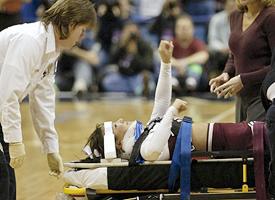 I found this story to be pretty damn warped.

It also made me remember going to Pitt basketball games as a kid and my dad screaming at the cheerleaders, “That’s dangerous! Someone is going to break their neck!” It was sort of embarrassing, but I guess he was right.

Tangentially, it also was not unusual for him to roll down the window at a traffic light and indicate to the car beside us to do the same, if he saw a kid standing or walking in the vehicle, not an uncommon occurrence in my youth. “That child should be restrained” he would say to the confused and often quite pissed person.

ST. LOUIS — Kristi Yamaoka wasn’t about to let a broken neck and concussion keep her school spirit down.

The Southern Illinois University cheerleader lost her balance during a routine Sunday and fell about 15 feet onto her head, hushing the crowd of about 14,000 as she was placed in a back and neck brace.

But the 18-year-old sophomore, in fair condition Monday and expected to make a full recovery from chipped neck vertebra and a concussion, let the stunned fans and national television audience know right away that she was going to be OK.

When the pep band fired up SIU’s fight song “Go Southern Go,” Yamaoka gave a two-handed thumbs up from the gurney, then moved her arms — the only things not strapped down — in time to the music and cheered.

“As long as my arms were functioning, I could do the fight song,” a groggy Yamaoka told The Associated Press by telephone Monday morning from Saint Louis University Hospital.

“I just knew that it would be a little easier for my team and squad to concentrate if they knew I was OK and not worrying about me,” she said. “I didn’t want the team to get distracted. I needed them to win for me.”

They did. The Salukis beat Bradley 59-46 in the Missouri Valley Conference tournament final, earning their fifth-straight berth in the NCAA Tournament.

Yamaoka’s routine from the gurney got her a standing ovation at the Savvis Center and mention later on national sports TV highlights packages. She said her season is over — doctors have told her not to perform for six weeks.

Yamaoka, of Springfield, Ill., said she doesn’t remember the midcourt tumble during a timeout with 3:25 left to play. She was supposed to dismount to the front of the human pyramid, where two cheerleaders were ready to catch her, said the squad’s cheerleading coach, Jennifer Graeff.

But Yamaoka lost her balance and tumbled off the back, landing on her head.

Yamaoka was motionless for a few minutes on the court, but says she recalls hearing SIU’s fight song and couldn’t resist leading the cheer as she was taken away in a brace.

“I do remember that, the fight song,” she said.

Graeff urged Yamaoka to stay still, fearing her cheer could hurt her more. But Graeff saw that the medical crews at Yamaoka’s side didn’t seem to have much of a problem with the impromptu show of spirit, so Graeff let it go.

Yamaoka asked about whether anyone had videotaped the game, specifically the last 4 minutes, Graeff said.