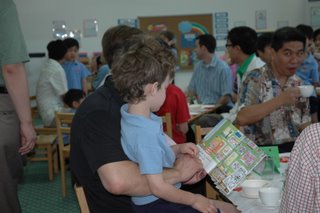 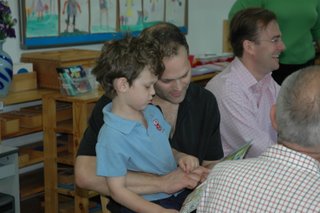 Eli’s class held a Father’s Day breakfast last Friday. There’s not much cuter than watching a bunch of five and six year olds carry hot cups of coffee on china across the room. They had practiced for days and the intense concetration and two hands on the saucer technique and slow, slow gaits were priceless. His teacher sent me along these photos.

This morning, jacob read a book about dinosaurs to eli’s class at circle time. That was priceless as well. Unfortunately, I didn’t know it was happening so I didn’t have my camera. But he did great and was hilarious answering questions afterwards, sitting in front of the class in a chair with his legs crossed.

“Did all dinosaurs have wings?”

“Were all dinosaurs slimy?”

“No, the only looked and felt that way when they were in the water. Race?”

“Did dinosarus pee and poo?”

“Of course. They were alive.”