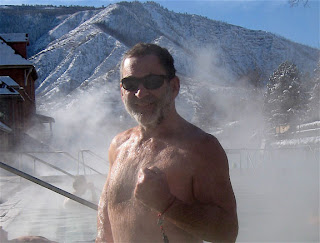 Wow. What a world. Dixie and David Kann are on a ski trip in Aspen/Snowmass. They got out there when it was -5 degrees and 24 inches of new snow. Take the bad with the good. DK took this video of Dixie in Snowmass and emailed it to me here in China..I uploaded it to You Tube in, I guess, California. And now you can see it wherever you are.

I dare say there aren’t many 71-year-olds with a reconstructed bladder and a titanium hip looking much better on their boards. Or at the subzero Glenwood Hot Springs.

All reports are they are having a great time though Dixie was quite concerned about DK constantly looking at his “walnut.” (That would be his Blackberry.)

What doesn’t kill you makes you stronger, or more willing to be way out there, as the case may be. Further evidence is this Thanksgiving report from Delaware Dave:

The Turkey Day pics capture things well. “Wall Street,” dressed in a Randle-El jersey, frying a turkey while smoking a Cuban stogey in the Delaware rain. He definitely gets bull goose looney points. We missed you guys. Symbolically, we made an extra turkey for your family that went uneaten. Could have fed a Chinese village.
The highlight of the weekend may have been the trip to the bowling alley apre turkey. Dixie claimed to not have been bowling in 50 years. Well his muscle memory returned from Forward Lanes. He smoked us all in the 1st game with a 152, highlighted by 3 straight strikes in the final frame. To top it off he shimmied like Johnny Petraglia, doing a nifty dance in the lane every time he made a mark. To top it off he bought a bowling alley pitcher of beer which we enjoyed on a Friday afternoon.
Emma was talking smack about the turkey bowl for a full year. After 4 downs her and Sarah ran off to the playground. We played on a totally drenched field. Huge mud puddles. When I caught Dixies stop and go long on the opening play Jesse decided we were playing tackle and took me down in the mud. He is a smart kid but has yet to figure out the 1st play call, and most other play calls from Dixie, is stop and go long.
Or this from Wall Street himself:

Dixie went to the hotel at about 3pm on Turkey day to get ready for dinner. At about 5pm, after we had started frying the Turkey, Suzie became so distraught over Dixie’s continued absence (only exacerbated by the unanswered phone call to the hotle room) that she
began to mobilize the troops. Just as Laura and Suzie stormed past the Turkey fryer with car keys in hand to go looking for Dixie, he pulls into the drive way – a call to the Delaware State Police was only narrowly avoided.

Dixie’s comment to the commotion “I knew when I missed that phone call trouble would be brewin'”.

Suzie’s and Laura’s dash past the fryer was the closest any of the risk averse Delaware guests got to the boiling pot of oil with the exception of course for Dixie who almost kicked the pot over during his first looksee (after which he was banned from coming within a three foot radius).

Jesse on the mat Holiday shows
Scroll to top