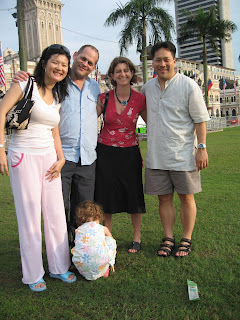 With Mei Fong and Andrew Lih. 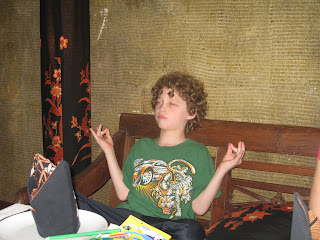 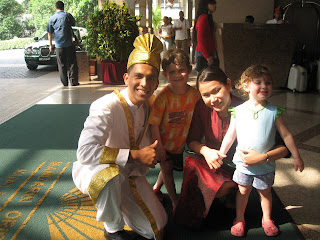 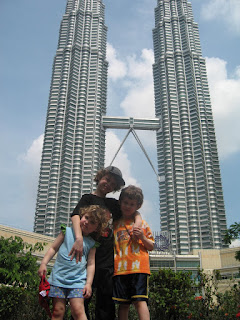 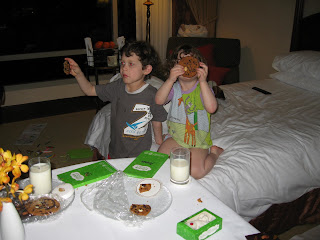 The first night at the Mandarin they wheeled in big choc chip cookies and glasses milk for each kid, along with boxes of colored pencils with their names on them. Ridiculous. 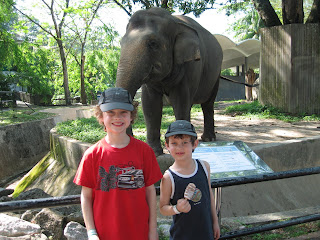 It felt more real somewhow to see tropical zoo animals in a tropical clime. But a zoo’s a zoo. 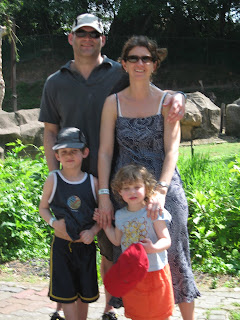 Jacob got the camera, watch out. 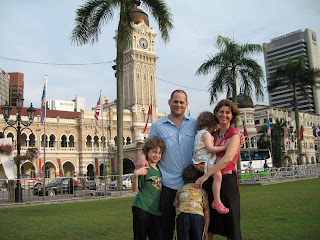 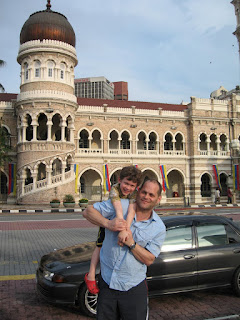 I was hesitant to go Malaysia. I think I even said at some point I would never go there. It’s a Muslim country, they don’t recognize Israel, Israeli passport holders can’t enter the place and my basic thought was I’ll go drop my hard-earned bread in some other pond.

But I sold out faster than a DC lobbyist. A couple of our friends were going to Malaysia and asked if we wanted to go and, bam, we were in. I admitted to a few people about my hesitations and they mostly mocked if not outright condemned me. So now I’ve gone and back and I mostly think it was a really good thing to have visited and to have had some positive interactions with women in head dresses.

But I will also admit that it was a little unnerving at times. Is that bad to admit in a public forum? You get used to the head scarves quickly, but we came across a few women in burkas and they froze me a little. I’m sorry it’s just so … chilling. How much of that is just our own cultural prejiduces? Probably a whole lot. But there is something inherently antithetical to everything I’ve ever been taught or come to know about life to see that. I try to be open minded and largely am, but th eburka.. that’s a tough one.

Now, having said all that, KL was really a pretty cool city. Our hotel was right next to the Petronas Towers, which are the tallest towers in the world. I think they were the tallest building in the world when they were built a few years back, but there’s always a bigger phallus on the rise somewhere, I suppose.

Downstairs there is a big mall. We spent a lot of time there. It was very Western. They had a Dunkin Donuts and an A&W, Nike, Reef, Quiksilver, French Connection and adidas stories, amongst many others. We bought a bunch of stuff at Parkson’s, a very nice department store. I don’t know where it’s from but word is there’s one in Beijing and if it’s like the one in KL it could be life changing. It was really nice. In one little area, we could buy Crocs, clothes, kitchen ware and toys like legos and Hot Wheels that you just don’t see in China (although it’s all made here).

Actually, I just did some quick “research” – Parksons is a Malaysian company and they have many stores in China. It’s really nice. You may recall how last year I wrote about our hunger in Hong Kong for stores and we all ran into a terrain station book store like we had found an oasis in the desert. Definitely some of that vibe at the mall. I will have to check that out. I was also struck when I passed a multiplex showing all American movies and there was along line of Malaysians, women mostly clad in scarves, waiting to get in.

On the fourth floor of the mall there was a huge food court with mostly Indonesian and Indian food. It was packed and the food was really good. The kids only wanted to eat at Sushi Kling, a conveyor plate place. Again, I can’t stress how interesting and different the diversity of the people we saw there was compared to China, where everyone is, uh, Chinese. Malaysia is about 70 percent Malay, 20 percent Chinese and 10 percent Indian. Many of the Indians are from South India or even Sri Lanka (which would make them Sri Lankan, I know), so very dark skinned. I would guess two-thirds of the Malay women wore head scarves.

Becky’s colleague Mei Fong is Malaysian Chinese and she was there visiting her family. We got together with her and her husband Andrew and it was very interesting to learn more and get a little tour of the city with her. Especially interested when Andrew got pulled over for an illegal U Turn, then listening to Mei speak to the cop in Malay. She said that we had a sick European child about to throw up and had to get back to the hotel. Anna was asleep, slumped over and looking pathetic. He glanced back at her then said, ”Well, that was illegal and you will have to pay a summons” but she talked him out of a ticket.

The Mandarin was probably the nicest hotel I’ve ever visited, but not over the top. There was a pool on the third floor, which was spectacular, on a deck overlooking the whole city. A large park stretched out behind us and on one side was a big mosque. A few times a day they broadcast very loud Arabic calls to prayer. It felt decadent to be sitting in that pool listeninn to that, and maybe a little foolish. The pool was as international and Oriental (in the old, classic sense) a place as I have ever been. There were people from all over there, many from the Middle East.

This cute little black-haired girl came over and started playing with us one day when I was tossing rings for Jacob and Eli to fetch. She played with us off and on for two days. Very sweet smile, couldn’t speak much English, had a nice, fat older brother. I asked where was from, guessed Indonesia, Malaysia, India, Sri Lanka. “no, no. no.” finally – “Saudi.” Her mother was poolside in a full body black robe and headdress (though not a face-covering burka.)

Anna was playing with a cute little girl. I asked her older sister where they were from. She said, pointedly I thought, “Palestine.” I saw their father, a burly guy. We looked at each other, smiled, nodded. I really wanted to talk to him, find out who he was, where they lived, but I was a little scared to open that can of worms and hadn’t decided how much information to reveal about myself and the moment passed.

People were mostly very friendly or else just ignored us. There are plenty of foreigners there so we didn’t stand out all that much, even at the zoo, which was almost entirely locals. Because Malaysia was a British colony, virtually everyone speaks good English, anothe rbig difference from China.

It was not as pathetic as the Beijing Zoo but still a little shabby. I thought for a minute we lost Jacob there and I freaked out. Sprinting though the zoo sweating and thinking “I have lost my kid in Kuala Lumpur” was not a great moment. He had only drifted away and come back to Becky, but I was sprinting around the park cursing him. It was good that he found Becky before I found him or I may have strangled him.

We were only in KL for two days. Then we went to Langkawi, stayed at Tanjung Rhu, a really nice little eco-friendly resort and it was basically a tropical paradise.. mango and pineapple trees growing. It was wonderful but not as interesting to write about. Except..

We rented some boats and went on a mangrove tour. Very cool.. saw monkeys, lizards, and lots of eagles. We also walked through a bat-filled cave. We passed another boat carrying a couple, woman fully burkaed out, only her eyes visible. Then we ran into them on the little island where the cave was, on our way out. She was sitting on a bench, her face uncovered –and she was beautiful. Really, really strikingly gorgeous and she looked me right in the eye with .. what? I don’t know but it really froze me, a strange mix of attraction, confusion, curiosity and probably even fear I’ll confess.

We were with two other families we are good friends with and there was a fourth Beijing Riviera family there by chance whom we didn’t really know. Turns out they are moving in next door and have a boy Jacob’s age and the two of them hit off and spent the whole last four days inseparable. They are Finnish and his name is Erro but Jacob insists on calling him Euro.

One last creepy note, on the way out we were in a store in the Langkawi Airport, which had a surprisingly good English language book selection. I browsed through and came across Henry Ford’s Complete 4-Volume THE INTERNATIONAL JEW, subtitled “the world’s foremost problem.” Very nice. I was happy to have come across it on my way out of Malaysia rather than my way in. I was curious about what exactly this was, so I did some searching around.

If you want to read about this from a friendly perspective, click here.

And if you just want to be scared and see a different perspective on Mr. Ford, click here