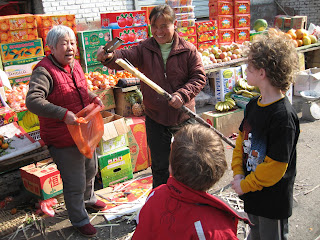 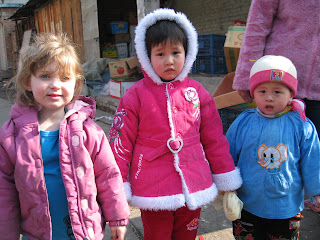 Anna and friends. Notice how bundled up they are.
Chinese people think we are committing child abuse
to have an open coat like this. 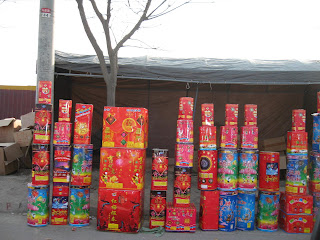 Fireworks stand near our house. There were many of these.

It is truly exciting to be here for Chinese New Year. The holiday is like Thanksgiving, Christmas, New Year’s and Fourth of July wrapped up into one holiday that celebrates family, nation and a love of food and fireworks. Before moving to China, I had only a vague awareness of the holiday, which barely extended beyond understanding that each year was named after one of 12 animals in the Chinese zodiac.

Here, a palpable buzz was evident about two weeks before the actual holiday, which fell on Sunday, February 18 and runs for 15 days, ending with this Sunday’s Lantern Festival. Our kids enjoyed learning about the zodiac, with this being the Year of the Pig, and each child participated in a Chinese New Year’s play at school. They understood that something was afoot, but all of us had only an inkling of the holiday’s true significance.

Gift boxes of fruit and candy began appearing in large stacks in grocery stores and at little fruit stands all over town. Cartoon pigs and other decorations went up everywhere. Fireworks stands sprouted like mushrooms in a cave. Though they go off randomly year-round, the volume noticeably picks up day by day as the holiday grows near. The explosions rattled my nerves at first — I had a bit of a fireworks phobia before moving here — but I began to barely notice them.

By the first week of February, the parking lot of the local market up the street4 filled with New Year’s lanterns and red decorations of every shape and size. On the busy Jingshun Road, people trailing overstuffed suitcases packed onto long-haul buses heading back to their hometowns or villages for holiday visits.

Chinese New Year is an especially momentous holiday for the millions of migrant workers from rural provinces who fill the country’s booming cities. They often work in grueling conditions, living in unheated dorm rooms with no running water, while their entire families are left behind. The holiday marks their annual trip home, where they are expected to arrive bearing the fruit of their labor.

A couple of months ago, reporter Mei Fong profiled Wei Zhongwen5, a Beijing worker from the northeastern Jilin Province (which is close to Harbin). Several readers were moved to contribute money and I attended a ceremony at Beijing’s Legal Aid society where Wei and 10 other workers gratefully received about 10,000 yuan (US$1,292). That night, 10 of the 11 were boarding a special migrant worker’s train home, leaving at 2:30 am for an 18-hour ride that costs 60 yuan. They were particularly happy to have some extra cash to bring home.

Wei, their leader, spoke with an eloquence that surprised me. “Thank you from the bottom of our hearts,” he began. “Though the money is not big it is very heartwarming for us that people pay attention to our lives. Having a voice in society is very important to us.”

Those final words really moved me and prompted Rebecca and me to give some small gifts to some of the guards and other employees at our compound. Most of them are very young migrants and they stand duty all day and night in any and all weather. I thought it was important to acknowledge that we see them as people.

On the day of New Year’s Eve, we put 10 yuan into 20 envelopes and the kids and I rode our bikes around and gave them out, along with oranges, which are said to represent good health and long life. Jacob enjoyed handing out the gifts and I reminded him to say “chun jie kuai le” (“happy Spring”) each time. The guards seemed surprised, touched and a little nervous — I don’t think they’re supposed to accept presents.

We then drove downtown to Ditan Park, where a temple fair was kicking off, as were thousands of similar ones all over China. Because tradition calls for families to gather on New Year’s Eve for a large meal, most people were at home preparing. The roads were amazingly empty, the fair uncrowded in sharp contrast to the throngs who would flock there the rest of the week. We watched a traditional lion dance, which excited the kids initially but couldn’t hold their attention. They were more interested in the previous performance, which featured young children dressed up as emperors and empresses, and most interested in the carnival games.

We blew a lot of yuan to win three stuffed animals, stopped in the peaceful temple to light some incense, then headed home. Friends joined us and we all enjoyed gorging on mounds of jaozi (dumplings), the traditional New Year’s food we asked our ayi (housekeeper) to make the prior day before giving her the afternoon and following week off. Later, we all drove down a nearby country road to set off some fireworks. The pyrotechnics scared me but it was thrilling to be outside on an isolated lane, listening and watching as the horizon lit up and booms reverberated in the distance. I wondered just how much it could pick up at midnight and appreciated the no-fireworks rule within our compound, which made it an island of calm.

By the back gate, a crowd of onlookers watched two American men smoking cigars and lighting Roman candles in the middle of the road. Nearby, two young Chinese men lit huge chains of fireworks while their dates held their ears. An old man rode up on a flatbed tricycle and loaded the large cardboard boxes that littered the street. We hustled the kids home and off to bed, as more cars pulled up to participate and watch the action.

At midnight, Rebecca and I watched a truly awesome fireworks display that filled the sky in every direction. Remarkably, it made everything that had come before seem tiny. All fireworks exhibitions I have seen in the past were municipal events with definitive boundaries and established beginnings and ends. This was all the result of uncoordinated individual launchings, which continued on for hours.

In the morning, the acrid smell of gunpowder hung in the air as we drove over to the apartment of our Chinese friends, George and Jen, to welcome the Year of the Pig. George’s parents were ensconced in the kitchen, cooking up endless mounds of jaozi, which they added to the piles of food on the dining-room table. A bucket of KFC chicken sat amidst the traditional Chinese fare.

On our way home, we tried a shortcut and ended up on a busy, clogged little lane. We were in the shadows of the Beijing airport, but could have been deep in the country. We stopped to buy sugar cane from a fruit hawker, who took out a machete and started peeling a seven-foot stalk and cutting it into 18-inch sections. A crowd gathered and I urged Jacob and Eli to pass some of the sugar cane out to other kids. They did so happily and I didn’t have to remind them to say “chun jie kuai le.”

Not much… Classic picture
Scroll to top