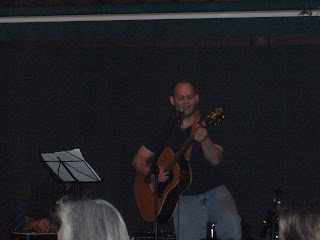 The gig was a big success. I was suprisingly not nervous. Which is to say I was nervous but not freaking out. We had a huge turnout. Dave lives right around the corner from me and word definitely spread around that two guys from Riviera were playing at the Orchard. So in addition to most of my friends, a whole bunch of neighbors and acquaintances and friends of friends came.

wW started at a little after 8, played to 9, took a break and played from about 9:30-11:15. During the first set, there were several tables of random diners in front . By the second, they had left and a large group of Riviera people who had been in the back of the restaurant in a different room came down and sat right in front of us, and peole were milling around and it was really just a party.

It all felt pretty good. I have never fronted a band for a night and the challenge of being the only guitarist with no rhtyhm section was greater than I thought.. greater than the challenge of singing, which is I was much more worried about. I was the rhythm section and chordal structure of every song. I think what I was most proud of was keeping my head and rolling through errors instead of tripping on them.

I loosened up a lot in the second set, let it belt a little more, partly because I turned off my monitor which was blasting my vocals in my face the first set. We had some really nice jams. I am ready to take this electric and become a full-on jam band. We really missed a drummer on a few songs. The video I captured was pretty random. I had a video on a tripod running for most of the night.. tape ran out at some point, but it will take me a while to get that video onto my computer, then compressed and formatted. This is what I captured on my camera.

Bits of “Soulshine” and “Monkey On My Back”

The Harder They Come

Sleepovers and such Wild Great Wall Hike
Scroll to top