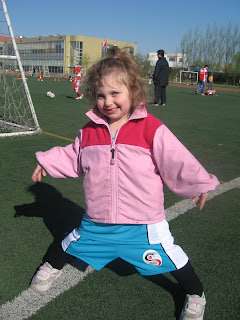 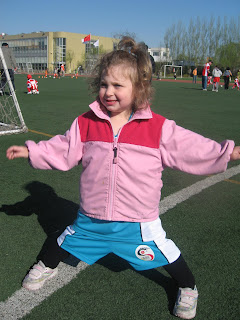 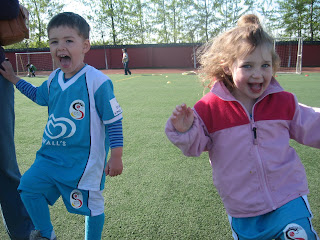 Anna now plays Saturday morning soccer as well. I coach three teams now, from 8:30-noon. It’s been fun but tiring. Jacob also plays LL baseball in the afternoon, 3-5, but I am mercifully not really the coach of that one though I do help out when I can. Jacob is surprisingly good considering he hasn’t really played in two years.

Anna is pretty good. She has a good killer instinct and scored three goals last week. Basically, only one or two kids have any idea what to do and she seems to be one of them. On the other hand, she burst into tears when someone kicked the ball away from her — “He took my ball!”

Jacob’s soccer games are really starting to look like something and it’s fun. We kept the core of the team together and added two of J’s best friends, so he has four or five really good buddies on the team. And I am coaching with my friend Scott for the fourth straight season, so it’s fun.

Scott was out of town and I had a little tiff with the other coach last week. Just ridiculous behavior on his part. Believe me, I tried to avoid it and contained myself so it never became more than a few words, though he kept pushing me. He was American, by the way.