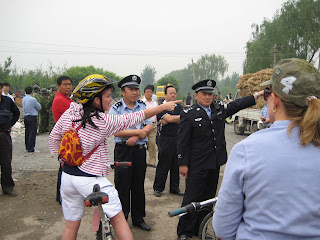 I went for a bike ride last Friday morning, with a group of neighbors. We basically rode up to the starbucks at Pinnacle Plaza, had a coffee, and some delicious egg pancakes form these little carts in the woods, and rode back. We all go to Pinnacle regularly. It is about 5 miles straight up the busy Jing shun Lu. But, of course, we were going backroads and looping around.

We headed out of Riviera, rode along the back side, crossed over a road and were planning on taking a newly constructed road. There was a lot of activity there, cars parked, people walking around. We rode about 100 yards max and were stopped by a bunch of police officials. They were clearly officers not regular cops.

Behind them was a troop of camof-wearing military guys standing at attention in formation. I believe they were the PSP, which are sort of military police, the guys they use for crowd control. Behind all of these guys we could see backhoes ripping up trees and bulldozers moving around. I would say they were tearing down a village and didn’t want us to see. The police ran over and waved us off.

“No,” they said, very nicely. “You can’t come here. This is under construction and it’s not safe for you to travel.”

We had a Chinese woman wiht us so there were no misunderstandings.

They pointed us to an alternate route. I took this picture and was trying to get the soldiers in one but one of the policemen saw me and said, “No, no!” motioning with his hands as well. I didn’t want to fight, though I probably could have kept playing dumb and squeezed off a few more because they were being very friendly and certainly weren’t thinking of me as a journalist. 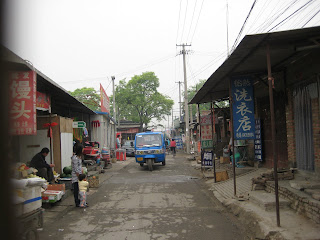 So we rode back out to the main road, then turned down another new road and followed it around and into this bustling village, which is basically behind the Orchard, the restaurant I played at the other night and which we frequent regularly. It was interesting how there was this bustling center that you don’t see form the main road at all. 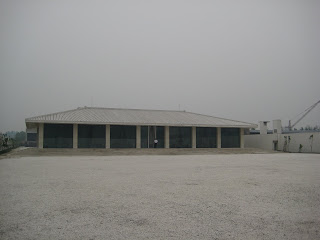 We rode over to the Green T House, a really wild avant garde place sitting in a dirt field. It is a great restaurant and kind of eerie. We’ve gone there two or three times and there have never been more than four or five other folks in those cavernous place. I think they survive doing corporate parties. They have a branch downtown that’s been there for along time. 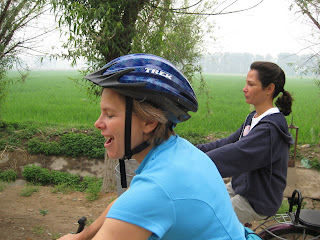 Then we headed back into the deeper country, past some paddy fields.. they weren’t rice, but I’m not sure what they were growing. Someone said lilac. 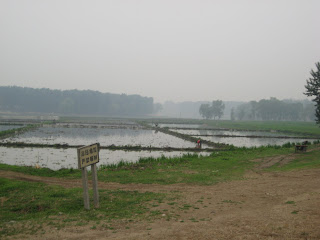 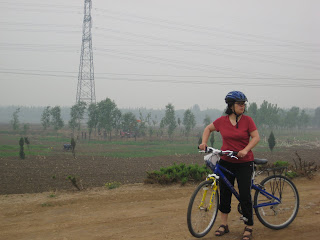 Then we rode out on some extremely bumpy dirt roads and past some really stinky canals and came to a really very pretty area, with fields stretching out to our right and these water field/paddies to our left. All of these photos came from there. 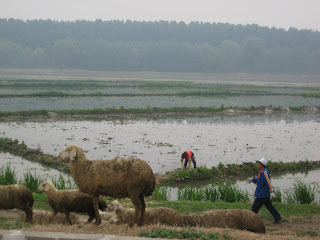 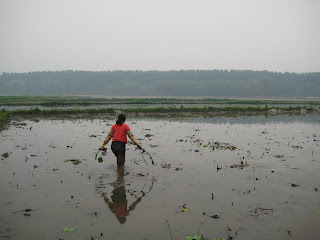 A guy came walking by with a pack of sheep and it was cool. You see them walking them by on Jing Shun Lu and it’s always sad, because they are squeezed into this little shoulder, eating tiny patches of grass popped up through the dust.. We call them “dirt sheep.”

I walked down to see this woman, who was walking through the mud and pulling out roots, with hip high rubber boots and full arm rubber gloves. I asked, via Tao, what the plants were and she said lilacs.

I walked down to see this woman, who was walking through the mud and pulling out roots, with hip high rubber boots and full arm rubber gloves. I asked, via Tao, what the plants were and she said lilacs.

It is really quite amazing that all of this stuff is so close to our house and so close to the urban, choked Jing shun Lu. We rode down a bit, crossed over a dam across the Wunyi River and rode just a bit to Starbucks.