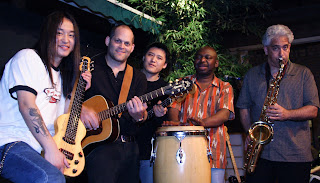 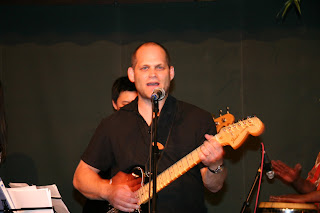 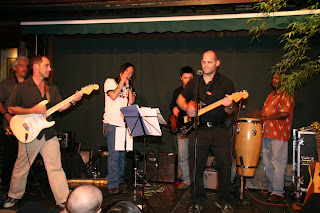 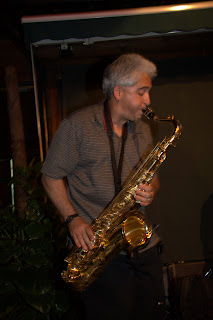 So we played again Saturday night and it went really well. Mr. Li switched from upright to electric bass, on which he is more nimble, and we added a conga player, Charles K, a Ugandan guy who is Anna’s music teacher. He is also the bandleader of Mitabe, the African band that played at our party last fall. he added a lot.

This was definitely our best gig by far, as it should be. It was our only fourth time so we better still be improving each time. W are certainly getting tighter and more comfortable and I am getting more at ease singing and also in being the bandleader, which does not really come automatically. The whole thing is pretty funny and, yes, I do appreciate the humor of this band in light of my dad’s.

I certainly never want to get too serious about it. On the other hand, I’m playing at my favorite spots and inviting all my friends. So I want it to be as good as possible and you have to be a little serious to pull that off.

Unfortunately, I don’t have any decent video of the gig. My friend Greg took my camera and was really into filming. He was up in our faces, walking all around, really feeling it. But the next morning when I plugged in and downloaded, he filmed… nada. I guess he never pressed record. It was kind of funny, really, and being able to give him a hard time about it in perpetuity is no doubt better than any video could have been. He is from Pittsburgh, too, so I can really unload on him.

Becky did take a short snippet but she didn’t bother to move, or even move the wine glass in the foreground, and she kept talking:”” really never thought this voice was good, but it does sound good.”

At least my friend Keary Lui pulled in late and took some nice pictures., shown here. The top one is now our promo shot, whenever we need one.

We had a couple of guest guitarists, including 17-year-old Joe Biselle, who joined us last time as well. He played about four songs and it was really nice. Dave L had an old IMF friend there, in from DC, with whom he played in a band long ago and he hopped up and played a few with us, too.

We introduced our first original song, “Beijing Blues,” which I wrot, sort of. I was winging it. I need to write a few more songs. Woodie grabbed my new Tele on that and started wailing.. He is a great electric guitar player and I need to get him playing it more. We closed with “Little Wing” featuring a wild two-guitar jam between Joe and Woodie.. I played acoustic and gladly held down the chords.