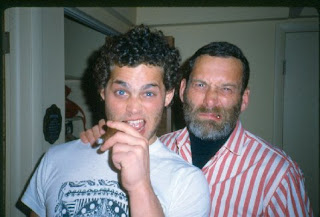 Archival photo from David Kann, circa 1987

Ok, over a week has passed since Dixie’s latest mishap and I think he has cooled down enough to allow me to discuss in this public forum. I will start with this email from David Kann, which sums things up pretty well:

I will tell you as he told me…

Buddy was riding his bike down a steep hill.
He was behind Wendy’s on Browns Hill Road.
He wanted to see how fast he could go.
He does not know why…but that is his recollection.
He got up to 25.5 mph before hitting a pot hole, tumbling and falling on his face.
He had a helmet on
He has a lot of bruises, cuts and scrapes.
He tore his rotator cuff.
He has been advised to go to a doc in NYC for surgery
He doesn’t want to spend the money.

This I believe confirms all of my expressed concerns about his reckless erratic behavior while skiing (on a prosthetic hip and remodeled lower spine).

I can’t be the one since I am an adolescent also and he and everyone else knows it.

Ok, this is a lot to digest. So let me start at the beginning. For those of you who don’t know Pittsburgh, Browns Hill Road is a steep mother. Think of the steepest hill you’ve seen in San Francisco and take about 15% off, I’d say.

He has relented and is having surgery in South Carolina of all places in a couple of weeks. The New York guy couldn’t get him in for a lot longer. I guess no one tears their rotator in Pittsburgh. His left arm is in a sling and he can’t really use it. I’m not sure how or if he is playing trumpet.

Another thing to note is that he was on his way to visit his friend Itzy in a rehab hospital. He went into Wendy’s, washed himself up, had his visit – and rode home, which is probably 6-7 miles. I was incredulous when he told me this, since it was the next day and he fairly house-ridden and in terrible pain.

Now this insane machismo is key to understanding all the rest. On one level, DK is surely right and it is insane to imagine a 71-year-old guy with enough newly made and implanted parts to rival Steve Austin deciding to ride his bike as fast as he could down an alley behind the Browns Hill Road Wendy’s (where I often had lunch with Ice and Eddy Krifcher while skipping school, btw).

But it is the same sort of adolescent temperment and never-say-die machismo that has allowed him to recover from all of these surgeries and abuses to his body in the last six or seven years. How do you separate them all out from one another? I don’t think you can. I’ve been to Pirates game with him still having a catheter just days after major surgery twice in the last five years. No one else would do that, and I think that get-up-and-go is a big part of his recovery process.

To paraphrase Popeye, he is what he is. Like a Great White shark, he can’t quit moving. So I say keep swimming, Dixie — but use your head at least every once in a while.