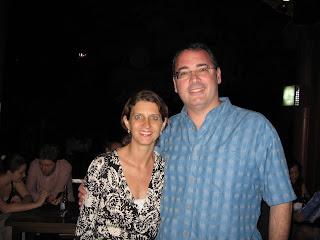 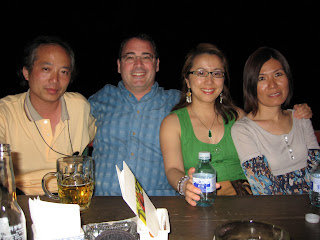 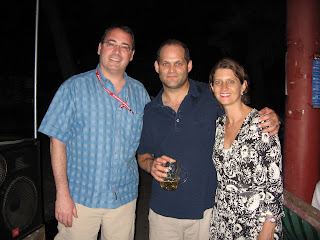 As I wrote before, a lot of people have been passing through town and we have been trying to see as many of them as possible. Tomorrow, Tom Weber of the WSJ arrives for two days. We’ll have a dinner with him and maybe I can get out to the Wall with him as well.

Last week, one of the visitors was Brad Barnblatt. He is a second cousin of Becky’s. They had never met, or even really knew about each other. He grew up and still lives in San Francisco. His grandparents were Moe and Tonia Saslove. Moe was Becky’s grandma Sonia’s brother.

Grandma Tonia nagged Brad into getting gin touch with us on his trip and it was good she did. We had a really nice dinner with him, his wife Portia, who is from Shanghai and two of her friends. We ate at Xiao Wang Fu’s inside Ritan Park, then moved down to the Stone boat for the Woodie Alan gig. They stayed for the first set, and I think they had a good time.

We had a really good gig, by the way. We had a new bass player because Mr. Li disappeared – his phone quit working. The new guy was really good and we felt relaxed, had a good crowd and played ell. The Stone Boat is really a super sweet place to be on a nice summer night. We play there again on July 20.

Falling Behind Will the Circle Be Unbroken
Scroll to top