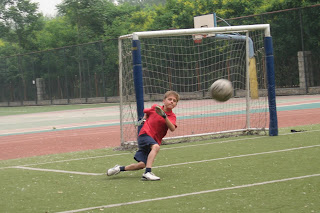 The winning photo, though I did a better crop
on the entry. 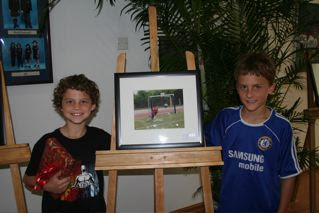 The proud winner; the photo;
the subject.

They have a photo contest every year at the kids’ school. Last year, Jacob and I both entered two shots n the Travel category. He was a finalist and I was not, a fact he often reminded me about while traveling. “I’m a better photographer, dad. You better let me take this one.”

All year, he would take a photo and say, “that may be good for the contest.”

We created his own folder in my photo software, deciding to review them all when it was time to make our choices and enter photos.

But when the entry form came out last month they had new categories — and travel was not amongst them. So much for those beautiful shots of the Sichuan peaks, or the Yangtze snaking to the horizon. The categories now were “My Beijing,” “Creative” and “A Day in the Life of DCB” (their school).

Jacob had ideas for creative such as “I can take a stuffed panda to school and photograph it on a desk.”

I finally told him to take my camera to school for a day and shoot stuff for A Day in the Life of DCB.

He did so and, amongst other things, took a fantastic shot of his best friend here Lucas Pos making a great saver. I though it was really nice and I knew that DCB really emphasizes sports, so I figured he had a good shot. He named the photo “Shot of a Shot” and we turned it in. I was too busy to get anything together for myself.

Anyhow, they handed out the awards last Sunday at a little fair at the new campus. That was the day we went to the Botanical Garden and Jacob kept saying “ We have to get to school by 4 because that’s when they’re giving out the photo awards and I think I won.”

We got there and they had 35 finalists (out of about 120 entries) framed and displayed in the lobby. 4:00 came – and Jacob won. He was absolutely beaming. He is going to be insufferable this year, but we were very proud of him and happy for him.