Saturday was an epic day in the life of Woodie Alan. We double dipped with an afternoon gig and then an evening performance.

The afternoon was at an outdoor street festival on a cool, rapidly gentrifying hutong street. All the photos below are form that performance, starting with our “opening act.” He had one tooth, much to eli’s delight. 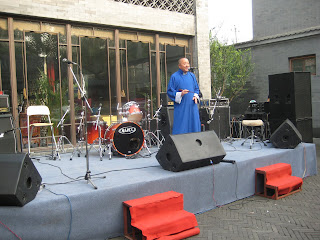 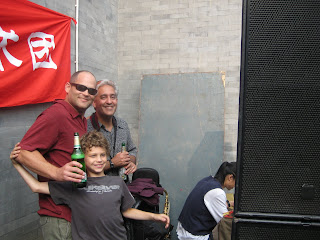 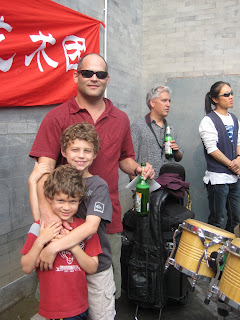 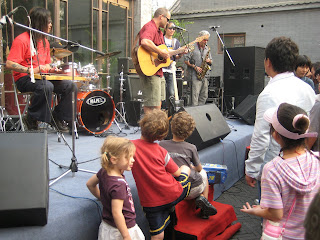 Fun to perform for a Chinese crowd–and my kids. 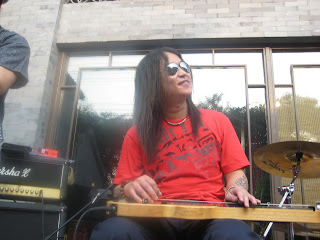 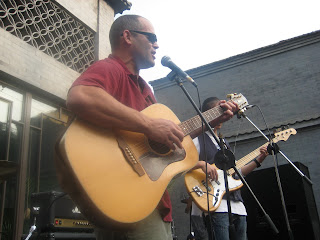 Eli walked around the stage taking these
individual shots and I think he did a great job. 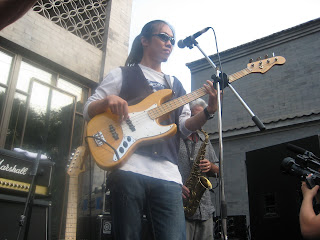 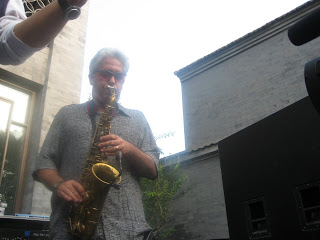 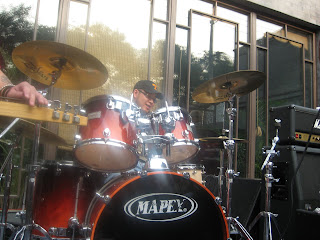 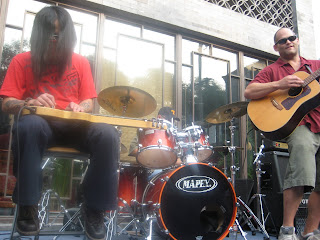 We played on a large stage inside a courtyard next to a hotel. Our “opening acts” were some old traditional Chinese musicians and one guy (pictured here) who told jokes and sang traditional songs. There was a large Chinese crowd but they were mostly hanging out by the back milling around the entrance on the street, rather than coming in. The promoters asked us to try to draw them up closer. I asked Woodie to say so in Chinese but he said, “you do it first and after a song, I will.”

We got on stage and I said, “Ni hao. (Hello). Please come forward. We want to see you.” And I motioned with my hand – and everyone rushed the stage, just like that. It was great. We launched into “Meet Me in the Morning” and I was pumped up. It was great to be playing to a mostly Chinese audience for the first time. Second, everyone rushing up was tremendous. Third, there were a handful of young Chinese girls looking at me in awe, like I was a rock star. And I readily admit that that fired me up. It was also really nice to be on a large stage for a change.

On top of all that, my kids were sitting on the edge of the stage right in front of me. It was just a sweet feeling and I thought we played really well for the first three songs or so. Then we hit a couple of rougher spots for two songs, where I felt like we were flailing, before finishing strong. It was a short set, only about 50 minutes. There were a couple of videographers documenting the event. One of the guys was a dreadlocked Chinese dude whom Woodie told me was a very famous director. Supposedly, he is going to give the guys who run the festival a DVD of the day and we will get a copy. A really good Chinese pop rock band played after us. It was a really nice event and supposedly the first outdoor street festival in China, though that doesn’t really make sense.

I walked Becky and the kid out to the car and said good bye to them , then rejoined Woodie and the rest of the band in a bar down the street. It’s a nice tapas place called Salud, where we played one time and where all performers had free beer all day long. So there we parked for several hours. It was the fist time I’ve really hung out with the guys in the band, even including Woodie. It was fun.

There were some Chinese hippies playing music in front of the bar. including a guy with a dreadlocked, pointy beard down to his belly button playing a ukele, another dude on a conga-type drum and a third, wispy little Indian-ish guy playing a bunch of instruments, including a small uke and a little plastic keyboard with a mouthpiece attached. . Woodie went out and played harmonica with them then I went and played guitar and tried to fit I and I think it actually sounded good and a big crowd gathered. It was fun.

By then, Woodie’s cousin and his girlfriend had shown up and a few other friends were there, and bassist Zhong Yong’s wife arrived. It was good to be a minority because that is how my life here probably should be but rarely is.

It was time to grab some dinner and go. I wanted to take everyone out to dinner but I only had about 150 rmb (20 bucks) with me. We went to a little place in the hutong, old school, not gentrified. And we all ate spicy tofu, gung bao chicken, fried noodles an other good, simple comfort foods and drank a bunch of giant bottles of TsingTao. The total bill was 79 RMB. That is $10, or a little more than $1/ per person. I think there were nine of us. So I was able to take everyone out to dinner after all.

Then we all piled into a few cabs and trekked over to the Stone Boat in Ritan Park, set up and played from about 9:45 to 12:30. Not surprisingly, we played really well, because we were loose and had spent hours hanging out together and had just played half of the songs a few hours earlier.

Woodie told me that his friend Powell Young, china’s top shred guitar player would be there and I said he should invite him to jam. “He plays really wild and fast,” Woodie said.

“Can’t he control himself and fit in?”

“I don’t think so. When he’s onstage, he’s in the spotlight.”

Powell sat inside hanging out with the large group of friends of Woodie at the show and on our last song, which was “Not Fade Away”, Woodie motioned to him and he ran up on stage and they handed off guitars. It’s a two-chord vamp song, with a Bo Diddley beat, an old Buddy Holly classic. Powell started soling and it was fast and intense but pretty “normal.” But then he kept going and going and going, playing with two hands all the way up and down the neck It was wild and, really quite tasteful I thought.

Lu Wei the drummer started going wild. He was really excited. Powell is a pretty big deal amongst musos. I did my best to keep up, banging those two chords for all I was worth for what seemed like hours. There were only about 25 people left, including 10-15 of Woodie’s buds. But they were all really digging it. There were a bunch of people at a table right in front of us, two sets of parents in their mid-50s, very distinguished, one guy smoking a pipe. They were definitely European and had two teenagers with them. They jumped up and were screaming. Powell walked off the stage, still playing, and took a seat on a chair and kept going. He was all over the fretboard, doing two handed tapping and just really fast, wild shred playing. I’ve covered guys like him in GW for 15 years but had certainly never played with a guy like that before. It was fun.

It finally ended close to 1 am and we all hugged and laughed, and stuck around drinking beer and BS’ing for another 45 minutes. I stumbled home at about 2 am and passed out. By 9:30 I was on the soccer field coaching Eli then Jacob. Rock star on Saturday night, schlepping dad with bags under my eyes Sunday morning.

Here’s a video of Powell playing with Joe Satriani in Taipei: