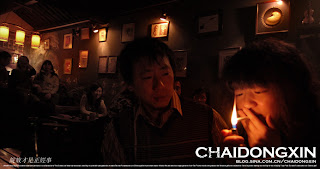 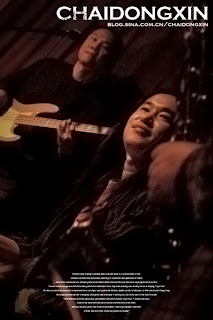 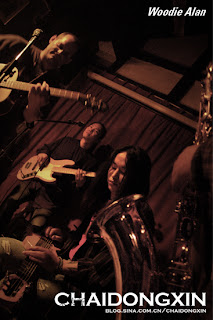 We had a great gig Friday night at Jianghu Jiuba, the little hutong bar I have written about before. Saxy Dave was out of town so we played as a quartet and had a whole bunch of friends jam. Joe Bisell, the 17-year-old guitarist who plays with us regularly, sat in for three songs in the first set. After he and his mom left, I think I was almost the only non Chinese guy in the room.

My friend Shen from Chinese Slam came with his wife, which was nice. A reader from my Chinese language column came after reading my column about the band, which was nice. Everyone else in the room seemed to be a musician, most of them friends of Woodie. After a song or two, he asked me if I wanted to start having guests. I said sure and Woodie started calling friends up. First, Claudio, a great Italian harmonica player, then the owner of the bar, a really good jazz tenor sax player, then one guitarist after another, including Powell Young, the famous Chinese shred king.

Then a guy who Woodie was very excited about — he told me he was the most famous blues singer in China. He called out a song and they told me “shuffle blues in E” and he started singing a cool jump blues in Chinese. Zhang Yong, the bass player, knew all the words and sang harmony. I asked him later if he used to be in his band and he said, “No, I know all his song from his CDs, which I love.” Woodie sort of twisted his arm to sing “Stormy Monday,” which I guess they used to play together back in the day. He forgot the words and turned the mic to me and I did my best. If nothing else, I know the words to “Stormy Monday.” On and on it went. We jammed until after one a.m. with one guy after another getting up and playing. It was really fun.

There was a guy sitting in the front taking pictures and it was obvious that he knew what he was doing. He is a friend of Woodie’s. Monday I got a Google alert that I had popped up online and found these photos on his blog. I think they are great. Note that we never posed for him. These were live shots. The crowd pics were taken at the gig.

I looked through his blog his blog and think that these are some of the nicest shots of China I have seen. If George Lange or anyone else who really knows photography is reading this, have a look and tell me what you think.

This video came from the first time we played Jianghu a few weeks back. I love this place.