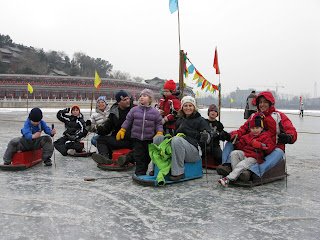 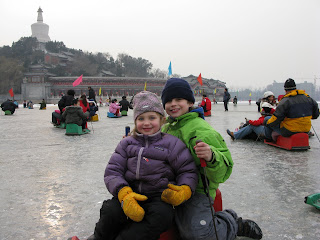 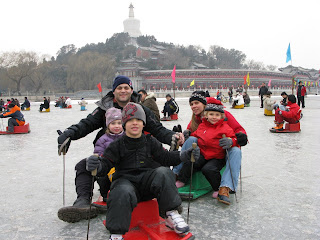 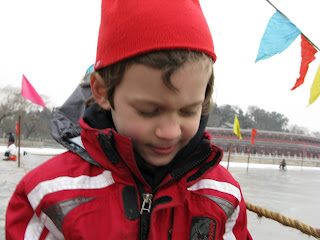 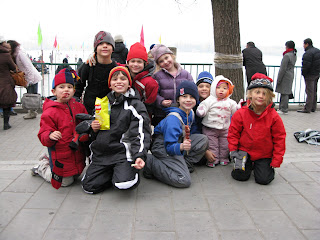 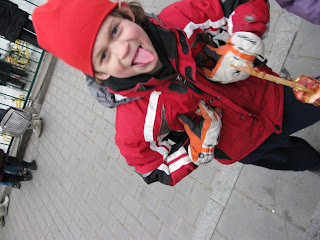 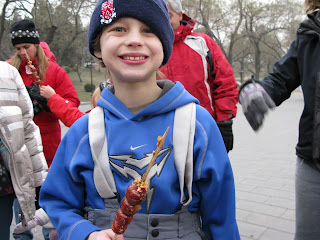 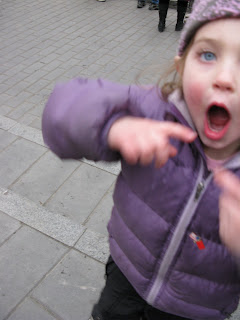 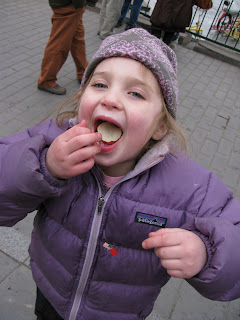 One of the truly unique things to do in China in the winter is to go ice chairing, or biking. We went with a large group of friends last year, down to Houhai Lake in central Beijing. Sunday we decided to go again with our friends the Lattas (close readers will remember them from a column I wrote last September – they were the family with four kids who adopted the Chinese baby they were fostering).

Saturday night at a party I spoke to a Beijing native friend and she suggested we go to Beihai park instead, saying it was much more beautiful and peaceful. Beihai is right next to the Forbidden City and it is a really uniquely peaceful place, which Becky and I visited on our fitrt trip here and to which we have never returned.

Houhai is a big lake not far from there, which is now surrounded by restaurants and bats. We had a great time there last year but it is really nutty so the Beihai option sounded good – and it was.

Really, truly fun and the people there were much calmer and more civilized. When I mentioned this to my Chinese teacher on Tuesday she said, “Of course. You have to pay to enter Beihai.” And she was right.

It was more families and calm young couples and no wild young men. They also did not have ice skating and kept the ice chairs (pictured) and the ice bicycles on separate patches. Houhai is a free for all , and the ice chairs there include actual old rickety chairs with little sleds on t e bottom.

Even at the safer Beihai Becky said to me after a while, “I think I know why they don’t do this in the U.S.” It’s pretty wacky, sliding around with these big ice picks used to propel you. We were actually the wild ones Sunday, especially after we ran into the Loevingers (Dave is our sax player) and we all started having races. When it got boring, we raced through the middle of the ice.

Afterwards, the kids all had bing tong hoolus, candied crabapples on a pointy stick. Then they just got silly and I snapped away.

I was fun to do something fun in the cold because it has been damn frigid almost every day since we got back and the 730 am bus is just brutal in the morning.

These pictures are the first from my new camera, a Canon G9 strongly recommended by George Lange.