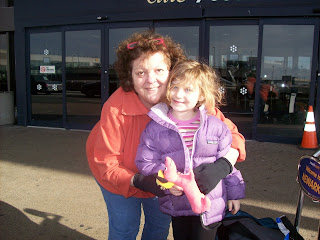 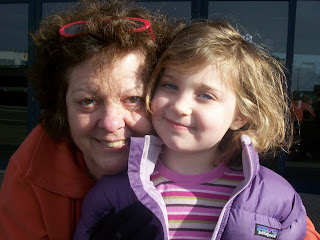 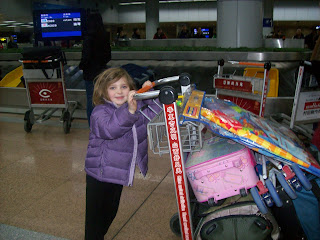 Still catching up on pictures from the U.S. trip, now working backwards. Here’s Anna with Aunt Carrie at the Newark Airport. They spent most of that last week together, while B was in meetings etc in NYC. enjoyed by all. Beck had a hard time moving all the luggage and Anna out in Beijing, where the usually bountiful redcaps were nowhere to be seen. So Anna just took a luggage cart and came walking out. I took the boys to the airport for the pickup and they were very excited. Jacob: “I call first Anna hug.” It was sweet.

They’ve been back for a week now and everyone is just about back to normal. Beck was welcome back by a sinus infection, but she’s on top of it and feeling better. We went chair skating in Beihai park near the Forbidden City today and it was great fun. we were with friends and ran into Dave, my sax player, and his family. I will post some pics tomorrow.

Also had out first 2008 Woodie Alan gig on Friday and it went really well. Played the Orchard to a good crowd, and with a bunch of friends sitting in, including a friend of Dave’s on organ — first keyboards with Woodie Alan. It shocks me really to hear us sound as good as do. It has exceeded my expectations already several times over. Didn’t really get any useful video though.
**

I know that Carrie is going to want to buy some of these pictures. And many others have asked me about getting some images. Anything that is posted here goes up to Picasa (because Google owns both, as part of their global domination). Click on the link below to go straight to the pages.

The previous years’ worth of photo is available at the lower link. If you care about the photos, go to the page, then bookmark it. (Or ask me for another link.)