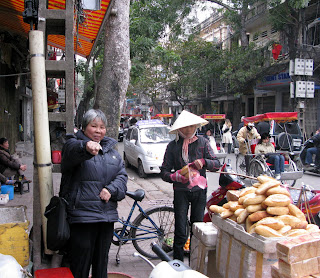 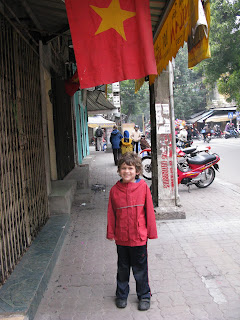 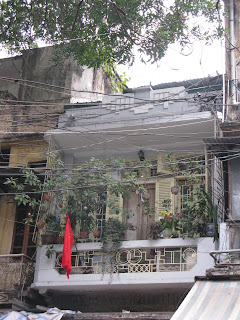 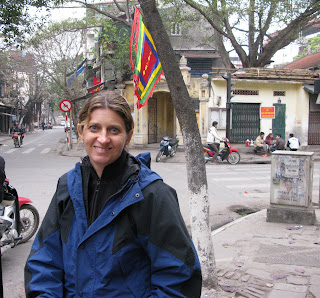 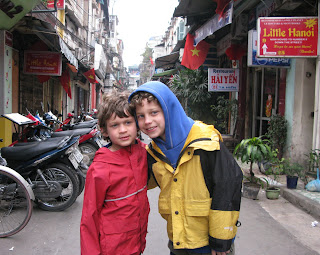 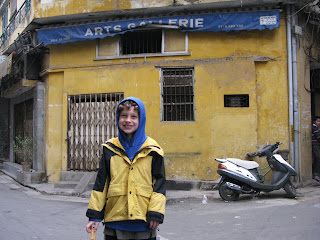 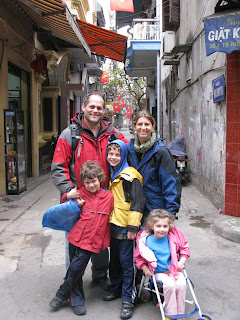 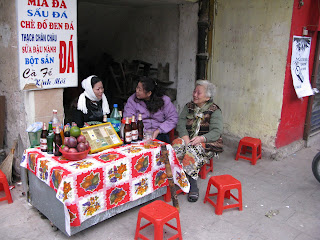 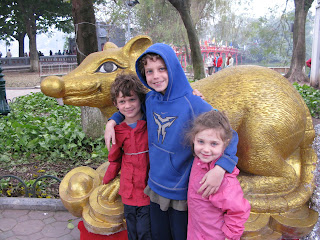 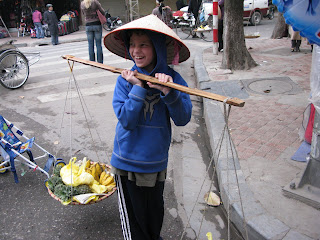 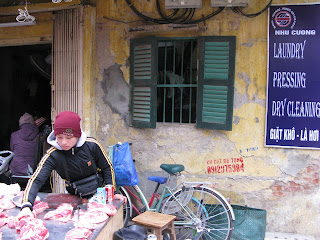 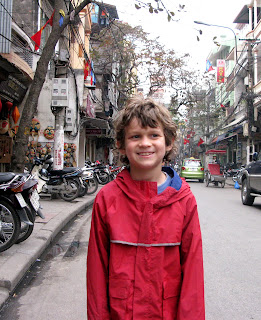 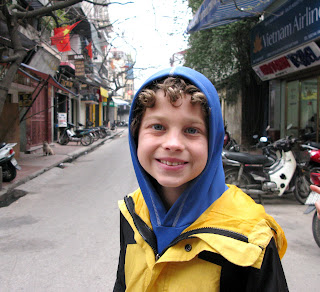 Wow. Hanoi. The name has such resonance and power. We stayed in the M Hotel, almost directly across the street from what remains of the Hanoi Hilton prison, which we will all be hearing so much about in the next six months, the place John McCain was held for all those years. It was closed for New Year — Tet, as they call it there, another name with unusual power — or I would have visited.

And then you get there and go, “This is hat the war was all about?” This is the place we were fighting over, that 52,000 Americans died for?”

It’s powerful as an American with a brain going to Vietnam. I started a very long post about this topic and will get back and finish it someday. You keep wondering, “do people hate me?” are they suspicious of us?” But there’s no hint of any of that. There are hammer and sickles and the iconic gold star on red background Communist Vietnam flags hanging all over the palce — far more than in china.

But you don’t have much sense of being in a communist or totalitarian regime there, except at the airport, which is just insanely inefficient — they were handwriting boarding passes. On the streets, in t e cities, I didn’t see a single cop or military presence. It all feels pretty laid back, the people are nice if reserved.

And Hanoi has a fabulous old city, where pretty much all these pictures were taken. We spent most of a whole day roaming all over it, stating at a large temple where people were surging in to lay money on shrines and even burn small bills and light incense and pray for a healthy and prosperous new year. Then we just walked all over the place.

There is still a distinctly French feel in this area and it reminded me quite a bit of the French Quarter of New Orleans, with similar architecture and a similarly charming run down feel. They also sell really good little baguettes all over the street and it’s a good thing: Jacob lived on them.

I felt very little anti-American hostility though others have told me they felt it in Hanoi. The one woman you can see in the pictures with the French bread did make some sort of power salute when I went to take her picture that seemed sort of militant but after I took the pic she laughed and smiled at me. It was a show.

I also stumbled onto a little gallery selling 60s and 70s propoganda posters. They were really beautiful – wood block prints, I think. I bought a bunch but focused on things like “Grow more coconuts for a prosperous export economy” rather than “44 American planes shot down this month” or a red map of Vietnam with picture of “uncle Ho” Cho Minh and Lenin looming above. That may have been a mistake.

There still seems to be a petty profound North/South split there. A Chinese woman I spoke with on the plane down told me that Chinese citizens don’t need a visa to go to Hanoi or the North but do need one to go to Saigon (as everyone there still calls HCMC). I didn’t believe here but she was very firm about this (spoke very good English) and I checked when I got back and it seems to be true.

Also, at our hotel at the beach I was speaking with a clerk who spoke perfect English and I mentioned that there seems to be little anti -Americanism. “Oh no,“ he said. “I studied English at university in Saigon and had a lot of American friends. My parents were both soldiers in the American War and they like to meet all of my American friends. No problem.”

“Yes, but which army were they in?”

“Oh South Vietnam, of course. They are from Saigon. I don’t know how they feel about Americans in the North.”

And then he kept going, dashing our little Pollyanna-ish conversation.

“I don’t know what they think in the North. I don’t understand them, and I don’t like them.”

Wow. Ok. In any case, I found Hanoi, the capital of our former enemy, utterly charming. And Saigon was just wild and wacky and not all that appealing. But we had very limited time in both places.

I will try to get some more up soon.