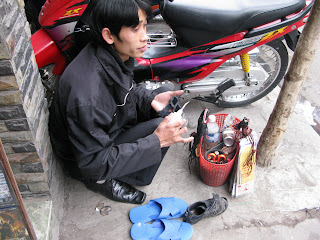 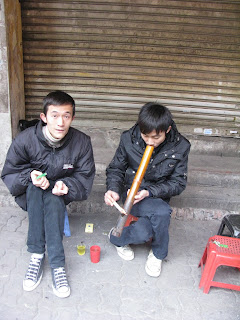 Here are a few particular Hanoi characters we came across. The top one is a shoeshine and repair guy. He noticed Eli’s Geox were coming unglued and chased after us, pulled Eli’s shoes off, gave him slippers to wear and went to town, gluing, polishing, putting on new heels. Then he did a job on Jacob’s. Really gave new life to the shes, which needed it. Then he way overcharged us, but still a bargain at 100,000 Viet Dong,which is only about six bucks.

He did a good job and we were impressed by his skills and his aggressive sales tactics.

The second two guys were sitting on the street working on a bamboo bong, with their eyes rolled back in their heads. I stopped to look and they offered me a hit, which I politely declined. One of them spoke English and I asked if it was legal and he laughed at me, said “sure.” He held a up a baggie and handed it to me, sticky Sensi buds. He said that costs about 5 bucks. Then I started noticing all these old men playing cards with bambooo pipes and bongs by their sides. A few people I asked said it was legal and “quite popular in Vietnam.”