“Big In China reads like an epic adventure, with music at its heart and the unity of people as its goal.  It is fascinating and inspiring to see Alan Paul’s cross-cultural, dual-language blues band, Woodie Alan, come to life. When they hit their stride the magic sucks you in and makes you want to shout like B.B. King.”
-Rick Telander, author, Heaven Is a Playground 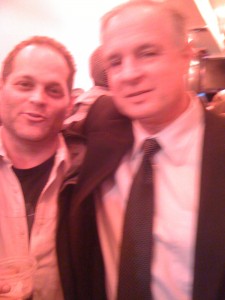 As I was finishing up writing Big in China, my editor asked me to start thinking about getting blurbs for the back of the book.I made a list in my head and started turning it over and over. I ended up getting a tremendous group of people, some of whom I knew well (Jim McGregor, Warren Haynes), some of whom I knew a bit (James Fallows, Peter Hessler, Evan Osnos, Lijia Zhang), some of whom I really didn’t know at all but thought would be really appropriate (Jeffrey Zaslow) and one rock star I knew quite well from having interviewed many, many times but didn’t really expect to agree to this request (Gregg Allman). I was very proud and thankful that all of these people agreed to blurb my book and a bit sad that they couldn’t all be used. The rest were supposed to be on an inside page that never happened. Maybe in the next edition!

But I digress.. as pleased as I was by all of the above quotes, it meant a lot to me when Rick Telander agreed to read the book and then was very enthusiastic in his praise. My excitement was not really commercial in nature, because I did not and still do not have a real clue what Rick’s name means in the marketplace. And I don’t really care, because Rick wrote Heaven is a Playground, one of my all-time favorite books and certainly one of the works that made me want to be a writer. Even more so, the book increased my interest in and empathy for urban issues. It is inconceivable that I would have ever written a word for Slam without having read Heaven is a Playground. And it i sprobably inconceivable that Slam would even exist with Heaven is a Playground having been written.

To the best of my knowledge, it was the first inside street level look at the most street of American games. Telander spent the summers of 1973 and 74 at a Flatbush Brooklyn playground, hanging out, playing ball and capturing the indelible stories of an amazing cast of characters – not only basketball demi-legends like Fly Williams and Albert and Bernard King, but regular guys hanging out and playing ball as well as street hustlers like the immortal Country James, a local pimp who loved to cruise around doing “the lean,” way over on the center arm rest of his car, left arm draped over the top of the steering wheel, air condition blasting and all windows down. I read this when I was 14 or so and fell in love with all of it, and so did all of my friends. When we started driving not long after, that’s exactly how we all drove. The book was deep inside all of us. People still ask me why I lean so far to my right when I’m at the wheel. It’s unconscious. 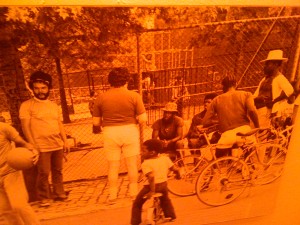 Photo of a photo from Heaven...

I met Rick once many years later, when Slam and Converse co-hosted a 35th anniversary party for the book in NYC – a gig which brought out many of the featured players and characters from the book . They were grey, bald, some were stopped over… and I was thrilled to see them all. I only wish Country James had been in the house.

I knew that Rick was a fan of Slam and he has done some writing for the mag, so I got his info from the good peeps there and got in touch. When he agreed to read the book, I was pumped. When he sent in the following quote, I was thrilled. And I still am.

“Big In China reads like an epic adventure, with music at its heart and the unity of people as its goal.  It is fascinating and inspiring to see Alan Paul’s cross-cultural, dual-language blues band, Woodie Alan, come to life. When they hit their stride the magic sucks you in and makes you want to shout like B.B. King.”
-Rick Telander, author, Heaven Is a Playground