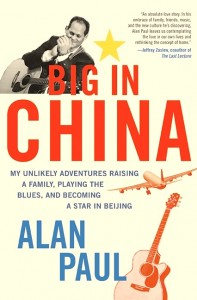 “Though most people don’t move here, form bands and get China-famous, readers will resonate with the family’s myriad of emotions: excitement during a trip to Guizhou over their first Chinese New Year and empathy when they return the States for the first time and feel lost. Moist poignant is the “who’s left and who’s leaving” pain of living abroad, which is omnipresent throughout the book and wisely summed up by Paul’s then-7-year-old son Eli. “We were fine before,” he says, “but now we’ll always feel sad about someone not being close to us.”

Reading it prompted me to realize that I neglected to post a very thoughtful, in-depth review in the Oregonian newspaper, by writer John Strawn, which ran in May. Here it is.

“A modestly framed yet keenly observed and entertaining account of life as an expat. An inquisitive traveler, Paul relied on the reportorial skills honed by his experience as a freelance writer to shape his response to his rather luxurious life abroad.

Paul’s musical friendships provide him with an entree to a China few Westerners see: nights out in working-class bars run by Chinese gangsters, hidden in remnant neighborhoods, or the chance to eat home-cooked meals prepared by his bandmates’ mothers. He writes about what he learns from his fellow musicians with a sympathetic and generous ease. Paul knows and has written about most of the modern guitar wizards, but the musicians of Woodie Alan earn his affection and respect as real bluesmen.

Both reviews have also been added to the Reviews page.

Gigging – one down , one to go Big in China is “engaging, adventurous, bighearted” – and...
Scroll to top