Well, this was sure a fun gig. Even got to go hang out with my dear friend Art Rummler and his family for a couple of days. Originally posted on guitarworld.com. 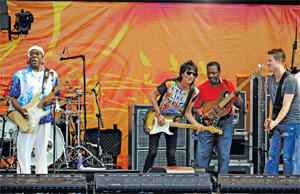 Buddy Guy stood in the middle of the Toyota Park stage in suburban Chicago, backed by his tough, veteran Chicago band and flanked by acolytes Ron Wood and Jonny Lang. A radiant smile lit up his face, making him look somewhat younger than his 73 years.

The sweaty, sun-drenched throng roared back its agreement. Clearly for lovers of rootsy guitar playing, there was no better place to be than at the third installment of Eric Clapton’s Crossroads Guitar Festival. The roster featured some of the finest contemporary blues-based guitarists, from the first act, Louisiana slide wizard Sonny Landreth, to the last, patriarch B.B. King. There were a few side trips into other styles of blues terrain, led by Sheryl Crow; country pickers Vince Gill, James Burton and Albert Lee; nylon-string jazz guitarist Earl Klugh; and folk masters Bert Jansch and Stefan Grossman.

“No one other than Eric could pull off a list of people like that,” says Trucks, who spent much of 2007 in Clapton’s band. “It’s not just people who can help fill the place; it’s people Eric wants there. We are all his guests, with some sort of connection to him.”

Attendees were largely thrilled with the day’s performances, though given the number of players involved, the event was not without a rough patch or two. The notable low points were a spotty performance by Johnny Winter and rambling onstage recollections by B.B. King, who left many in the audience impatient for more of his exceptional guitar work. But those were minor grievances at an otherwise stellar event, which like previous Crossroads shows, benefited Clapton’s Crossroads Centre rehab facility in Antigua. Highlights of the festival will be seen on a DVD to be released this fall.

Landreth kicked off the show before noon and was soon joined by Clapton, who traded licks on “The Promise Land.” Afterward, Landreth grinned widely and cracked, “Not bad for 12:15, huh?” It was clearly going to be a long, hot day, both under the sun and onstage.

Robert Randolph and the Family Band came out with both guns blazing and never slowed down. The short sets and the presence of so many great guitarists encouraged performers to bring the heat, and Randolph’s set grew hotter when Bonamassa and Italian blues guitarist Pino Daniele joined the pedal-steel guitarist onstage. The three of them engaged in some good old-fashioned head cutting. “That was incredibly fun,” Bonamassa told Guitar World afterward. “I’m not afraid of getting into it. I think it’s a blast to hang out and be great friends offstage, but when you’re on, it’s on! Music needs that sort of thing.”

“Hubert makes people around him better, both musically and otherwise,” Trucks says. “One of the highlights of Crossroads for me was walking into his dressing room with my son and fi nding him and Johnny Winter in there, and just sitting down and spending time talking to these guitar legends.”

Vince Gill displayed phenomenal singing and songwriting, profoundly precise picking, and flawless band-leading ability during his guest-heavy set. “Albert and James are the two reasons I play a Telecaster and play the way I do, so having them with me was a thrill,” Gill says.

Another highlight was the debut performance of Doyle Bramhall II’s new band, tentatively called Faded Boogie. Guest guitarist Gary Clark Jr., a young Austinite who was one of the event’s lesser-known performers, grabbed the spotlight with his singing and driving, trance-like licks. Crow also joined the group and seemed ecstatic to be there. On one song she was backed by the entire Trucks/Tedeschi band. “We play a lot of gigs,” Crow told the crowd. “But when Eric calls for Crossroads, that’s when you get excited.” Clapton then strode onstage to make his second appearance of the day.

ZZ Top brought their usual flair to the stage with an action-packed half-hour set that was rough and raw, while Mayer’s trio added funky grooves behind the guitarist’s slinky lead playing. The festival was just the sixth time that the husband-wife team of Trucks a

nd Tedeschi played with their co-headlined band, which was hastily pulled together just two days prior when Gregg Allman underwent a liver transplant, canceling the Allman Brothers’ planed appearance. Says Trucks, “It was hectic, and we had two guys onstage who we had never played with before. But what a thrill to be there!”

They were joined by Warren Haynes, who flew in from a Gov’t Mule tour of Europe just for the show. Other guests included Los Lobos’ Rosas and Hidalgo, who fit right in, and Winter, who struggled to find his footing on “Red House.”

Playing with Guy, Lang dared to wade into the lion’s den, grinning madly as he tried to stand toe-to-toe with the Chicago great, who loves nothing more than taking on all comers. The Rolling Stones’ Wood stayed closer to the ground, laying down slinky blues riffs that swirled around Guy’s high-flying lines. The trio tore up a hard-grooving instrumental version of the Stones’ “Miss You.”

Jeff Beck’s fusion-y, synth-heavy set began with “Somewhere Over the Rainbow” and ended with his acolytes, which included most of the other performers, swooning. “Jeff Beck is otherworldly,” Gill says. “I think of him like a classical player; he makes the guitar sound like a violin, and no one else sounds like him. Sonny Landreth and Derek Trucks are the same way.”

After all the fireworks, Clapton’s own set started out surprisingly staid, until old friends Beck and Steve Winwood came out and lit the fuse. Beck’s glistening slide lines sparked the blues standard “Shake Your Moneymaker,” and Winwood’s singing, guitar work and keyboard playing brought the best out of Clapton. They ripped through Blind Faith and Traffic classics and unleashed a soaring take of Jimi Hendrix’s “Voodoo Chile.”

Given the final solo slot as a show of respect, B.B. King joined Clapton, Cray and Vaughan for his strangely slow and chatty appearance. But when he finally started playing “The Thrill Is Gone,” the song soared. As they played, virtually every performer filtered back onstage for a grand finale roar through “Sweet Home Chicago.” Clapton, Guy and King took the lead, with everyone else remaining so respectful and afraid of stepping on toes that there were actually times at which no one soloed—and this from a collection of the best blues-based soloists in guitardom standing onstage. “All those great guitarists not wanting to take a solo made me laugh,” Gill says. “We were all just happy to be there.”

Clapton seemed to enjoy the moment as much as anyone. Late in the festival, he drew loud cheers when he thanked everyone for coming and began looking toward the future. “This was going to be the last one,” he said. “But I think we’re gonna have to do it again.”

More jams with Mark Karan – “That’s What Love Will Make You... I have signed my kids up for a cult
Scroll to top