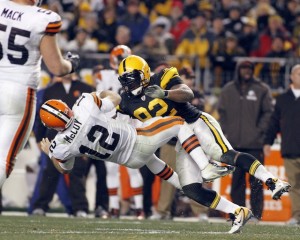 The Pittsburgh Steelers are one of the NFL’s marquee teams. Founded in 1933, the Steelers are one of the league’s oldest franchises, and have always been owned by the same local family, the Rooneys, who were integral to commissioner Roger Goodell’s 2006 hiring. They are the only team in the League to win six Super Bowls, sell more merchandise than anyone else, have a rabid, national fan base that can turn almost any stadium into a home field and appear regularly in prime time.

Despite all this, a sizable chunk of the famed Steelers Nation seems to have a persecution complex that has been on display since news broke Tuesday morning that linebacker James Harrison was suspended for one game for his concussing hit on Cleveland Browns quarterback Colt McCoy. Harrison became arguably the first player ever suspended for a tackle within the whistle. Unless the suspension is overturned on appeal – which never seems to happen – the Steelers will have to play a tough away game against the San Francisco 49ers, a game with serious playoff implications, without one of the league’s premier defenders.

It was all too much for the fans that flock to Steelers message boards. The outrage was fueled in part because while Harrison was suspended because he was tabbed a repeat offender, the play was his first personal foul in over a year. He had, in fact, seemed to alter his style of play after being fined $100,000 last year.

“There’s certainly a complex amongst Steelers fans for the last couple of years as they’ve seen James Harrison get fined in a way they don’t feel is matched by other dirty hits around the NFL,” says Dejan Kovacevic, a columnist for the Pittsburgh Tribune Review who has covered area sports for 26 years. “They feel the NFL has singled out the Steelers partly because of their physical play and partly because they have been very outspoken about the fines.”

Posters on Stillers.com called it a “putrid, wretched decision” and fulminated for Goodell’s ouster. The boards at the more active SteelerFury.com were filled with angry diatribes and posted lists of repeat offenders who have been fined less than Harrison.

“I don’t think most Steelers fans, including myself, feel there is a league-wide conspiracy against the Steelers, but we have serious issues with the inconsistencies of the league’s punishments for personal conduct and illegal hits,” says “Steel Perch,” a popular SteelerFury writer.  “The manner in which Rodger Goodell handles his personal conduct policies is inconsistent, reactionary, arbitrary and unfair by any rational measure.”

Apparently sharing similar feelings, the Steelers were the only team to not initially ratify the collective bargaining agreement that ended the NFL lockout last August. They were dissatisfied with the way in which fines and suspensions would be handed out and appealed.

“The NFL continues to punish the players but are really failing to protect them,” “Fury,” the founder of SteelerFury.com, emailed me. He says it all comes down to hypocrisy, a point he made in a well-reasoned article. The league talks a lot about player safety, he says, but is more concerned with looking good and appeasing the mass audience that has helped the NFL become the most popular sports league.

“The McCoy incident is just one of many,” Fury wrote to me. “A player was penalized but the system failed to protect the player that suffered some physical damage, i.e. put him back into the game two plays after the hit when he couldn’t remember the play.” 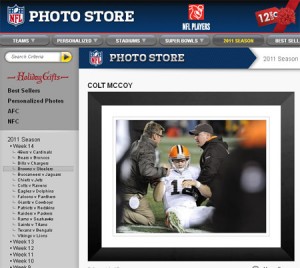 Hypocrisy? You could buy aphoto of a dazed Colt McCoy at NFL.com the other day.

Thus far, no one on the Browns has been punished for what seemed to be a gross oversight of the NFL’s concussion policies, though Dr. Robert Cantu, a Boston neurosurgeon and consultant to the NFL on concussion issues, said in an interview on WNYC that an investigation is ongoing. Browns president Mike Holmgren’s excuse – that no one on the Browns medical staff saw the hit in question and thus did not realize the severity – is embarrassing.

The very fact that McCoy was hurt in a Thursday night primetime matchup, a game in which several players on each team were injured, also points towards hypocrisy. If the league were really concerned with player safety not having them play this intensely demanding game on four days rest would be a good start.

Fury doesn’t dispute this, noting that while the league aims to please the masses, he and his readers represent a bastion of hardcore fans – the very type of people Steelers Nation likes to lionize.

“Most fans don’t eat, sleep and drink thinking about their team,” he writes in his article. “Most fans worry more about their health than that of their QB. They watch games for entertainment, not because it is their life. They worry about players that affect their fantasy football team. Goodell is catering to this type of fan. He could care less about the few diehards for each team. We are the relics.”

Thank you for all your support of me and Big in China Big in China band performance – Jan. 13 at Uncle Mike’s in Trib...
Scroll to top