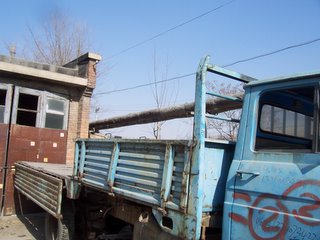 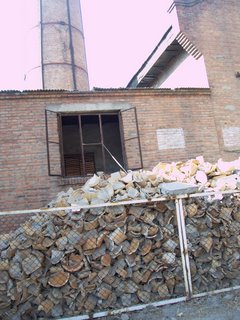 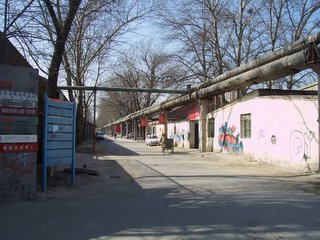 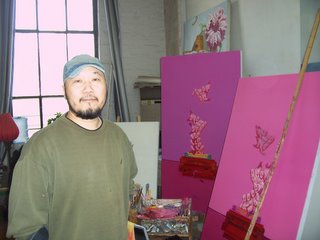 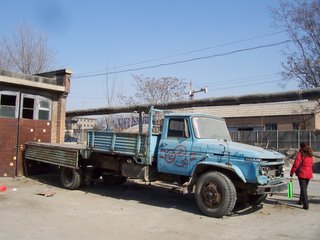 There is an artist’s loft/studio/gallery area not far from here, in the Dashanzi area. The area is called 798, which is some sort of oblique reference to the Tian. pr-tsts. I don’t understand it so I can’t explain it, but that it what I have been told. It is an old industrial area that has been transformed into galleries, studios, cafes, etc.

I went there once in the fall with Hal and Ruth (my in laws). We didn’t particularly like the art and it was sort of confusing to walk around and figure out where to go and what to see. But it has a nice feel and some cool restaurants and the mere fact that it exists in Beijing is more interesting than any particular thing you will see there.

The other day the school led a little trip there, led by an Italian woman who is an art buff who has lived here for a while and knew the area quite well. I headed down there and had a nice afternoon. (tough life, I Know). There were even two other men there. It was nice to walk around without having to think but my overall impression of the area did not change a t all.

I do think there is a certain industrial beauty to the whole setting, as captured to some extent in these photos. All around it there are still active industrial plants, so there are workers in blue hard hats walking around, and occasional fork lifts and dump trucks passing through.

We somehow ended up visiting this one artist’s live/work space. He is pretty successful, as I see his paintings around. I actually don’t like them all that much. He uses that fat little Buddha-type guy as his symbol and he is in all the pictures, sometime sin the foreground as the subject, sometimes just elsewhere, smaller. I thin he’s kind of ugly, but the guy is definitely a good technical painter, with a really nice sense of balance, symmetry and color palette. He was also very nice and it was interesting to see his works in progress.

He had probably 50 paintings, some quite huge, in various stages of completion, from sketches to almost done. I thought it was interesting how he worked on so many pictures at once.

It was a pleasant and interesting afternoon. The school is trying to become more active, serving as more of a community center, which is nice, because there is nothing else like that here. It’s lie you head off to the JCC or YMCA.