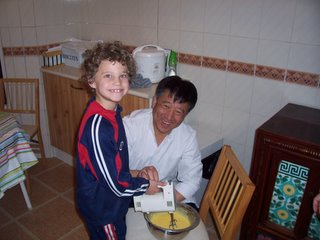 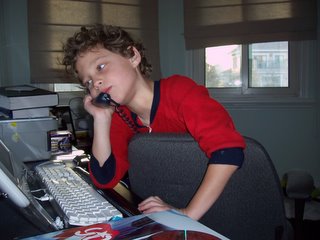 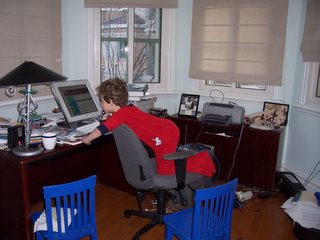 The top picture shows Jacob and Mr. Li beating the batter for his birthday cupcakes. Below that are two shots of him talking on the phone this morning to my folks and Laura and her family, who sang him “Happy Birthday.” He is always cold and has been wearing this sleeper to bed lately. It is really cute and fairly comical.

Happy Birthday to Jacob, who turns 8 today. He is so excited. He came into our room at 6:20 this morning and asked me what time it was.

He crawled in bed and cuddled for a few moments then said, “Mom, come on, we have to decorate the cupcakes.”

Last night we made a huge batch of cupcakes to bring into school this afternoon. I tried, really tried to make them myself, but as soon as I pulled the boxes out, Mr. Li and Ding basically took it out of my hands and took over. Jacob helped Mr. Li mix, then we all spooned the batter into molds.

We told Jacob he could pick what we had for dinner tonight and he chose a trip to Annie’s, the pizza place around the corner. Saturday, we are having a birthday party at Fundazzle, the huge ball pit/playground place downtown. Since it is sort of a pain to go down there, we rented a Riviera bus to transport all the kids, which they are all as excited about as the party itself.

We decided to invite his whole class, which is only 15 other kids. It was a good decision. Apparently, the big party has been the talk of the class for the last week and Jacob is basking at being in the middle of it. Mrs. Cameron told use she was really happy to see the whole thing and there were a few kids who never get invited to anything who are out of their mind with excitement. I said something about that to Jacob and he said, “oh yeah, that’s all anyone is jabbering about.”

Last night he said, “Tomorrow is going to be the best day of school ever.” They have a free period where everyone is allowed to bring toys in from home as a reward for the class having gotten25 merits. The cupcakes are right after that. Then they have their Thursday clubs, which he loves and afterschool he has gymnastics.

When we rode to school today, he was swerving around, pedaling fast and singing to himself. He was so happy and excited to go.

I am just incredibly proud of Jacob. He was really been not only a trooper but a leader for our whole family in terms of hitting the ground running here and getting adjusted right away. He immediately became a leader and force for good in his class and school and ahs a large, great group of friends. He really amazes me.

And all the more so for the fact that when he was 3-5 we were quite worried about him at times and many people were convinced he really had some issues. All of that makes me all the more proud of him. Happy birthday Jacob.